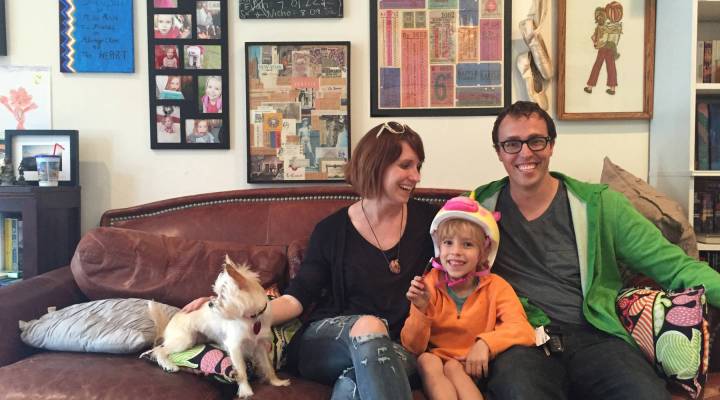 COPY
Aaron and Mary Murray live with their five-year-old daughter Vandy and their dog Murphy in Los Angeles. Tommy Andres/Marketplace
How The Deck Is Stacked

The middle class is the most talked about group in the 2016 presidential election. But who are they?

Chances are when you think of what it means to be a middle class family in America, you come up with some of the same things the U.S. Commerce Department uses to define the group: A steady job, owning a home, two cars in the garage, an annual family vacation, the ability to send your kids to college and a little left over to sock away for retirement. The middle class is a wide swath of Americans – it includes families that make between $48,000 and $145,000 a year – but it’s not as big as it used to be. In 1971, 70 percent of Americans were in the middle class. Today, it’s down to 50 percent.

And it’s not just getting smaller. The economy has changed dramatically in the past few decades, altering the types of jobs we do, where we live and what it takes to afford those staples of middle class life. Middle-class life has become 30 percent more expensive in the past 20 years.

We went searching for what middle class in America looks like today and we found Aaron and Mary Murray, two teachers raising their five-year-old daughter on $90,000 a year. But even though they are in the dead center of the middle class by income, they told us they feel like they’re living right on the poverty line.

Coincidentally the day we went to meet the Murrays, someone hit and totaled Aaron’s car while it was parked on the street.

What does being middle class life feel like to you? Tell us here.

To hear more of their story click on the audio player above.