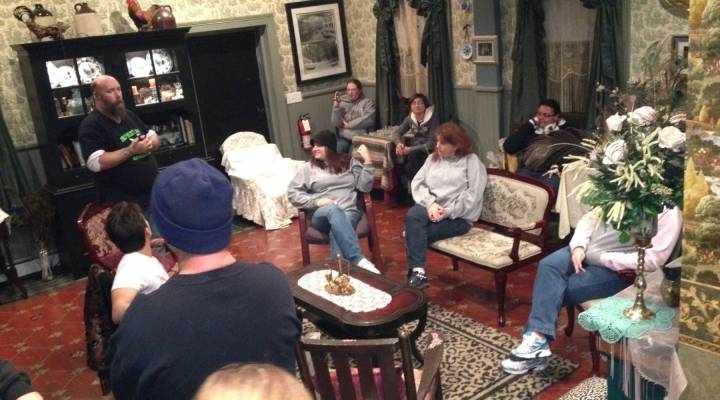 COPY
First time ghost hunters at the Shanley get an historical tour of the hotel. Daniel Huebbe

First time ghost hunters at the Shanley get an historical tour of the hotel. Daniel Huebbe
Listen Now

I’m walking up a set of narrow stairs at the Shanley Hotel in Napanoch, N.Y. I’m here to see a ghost.

The Shanley claims to have dozens of them — two angry gangsters on the second floor, a woman in white on the third floor and here, in a part of the hotel that used to be a brothel, Anna. My tour guide, Amy Daniels, sets a small twist-off flashlight on a nightstand in one of the Shanley’s bedrooms.

Daniels smiles. “Anna’s here!” she says as the flashlight turns on. “Can you turn that flashlight off now please?”

This is just one of the paranormal activities guests take part in at the Shanley Hotel, which has been featured on reality shows like “Ghost Hunters” and “Ghost Detectives.” Owner Sal Nicosia bought the 19th century Inn in 2005. He planned to turn it into a coffee shop, until he and his partners started hearing footsteps and seeing orbs.

“My friend Doug ran out and bought a book on ghost hunting,” he says. “I had a team come in and they did an investigation. And it just turned from what I wanted to really do with the place and took it in a completly different direction.”

So instead of coffee, Nicosia sells ghosts. The para-curious come from all over the country, hoping to hear a disembodied voice or a feel a ghostly cold spot. The rising popularity of ghost hunting has helped turned cold spots into cold hard cash for thousands of small businesses and even some cities.

“I think I’m going to start producing a bumper sticker that says: Ghosts are good,” says Joseph Marinelli of Visit Savannah. Savannah was named the most haunted city in the U.S. by the American Institute of Parapsychology. Marinelli says the benefits have been very real. “With more and more of those ghost hunter-type shows on television, we’ve seen an increasing number of people coming to Savannah specifically for that type of tour.” Marinelli says a big chunk of the city’s $2 billion tourism business comes from ghosts.

All over the country, businesses are rising up to meet the ghostly demand. One tour outfit in New York, Ghosts of New York Walking Tours, went from 300 customers in 2007 to 10,000 customers last year. Owner Phil Schoenberg has also expanded his business to Washington D.C., Connecticut and Florida.

Not everyone is excited about all of the paranormal economic activity. “It’s the in thing these days, you know? Everyone wants to be a ghost hunter,” says Willy Hassel. He drove five hours to get to the Shanley Hotel with his ghost hunting team, Spirit Chasers Paranormal. The team has organized its whole night around avoiding the Shanley’s other guests–at least the ones made of flesh and bone.

“We’ve got three recorders running right now, but all the time we hear people downstairs, laughing and walking around. It’s noise contamination and it’s very frustrating,” he says.

Amateur ghost hunters maybe annoying, but they bring in real money. Owner Sal Nicosia says most of his guests are new to the paranormal. “I’m finding that it’s all new people, never done this before,” he says. “It gives me a satisfaction seeing the expression on their face, that there is something there.”