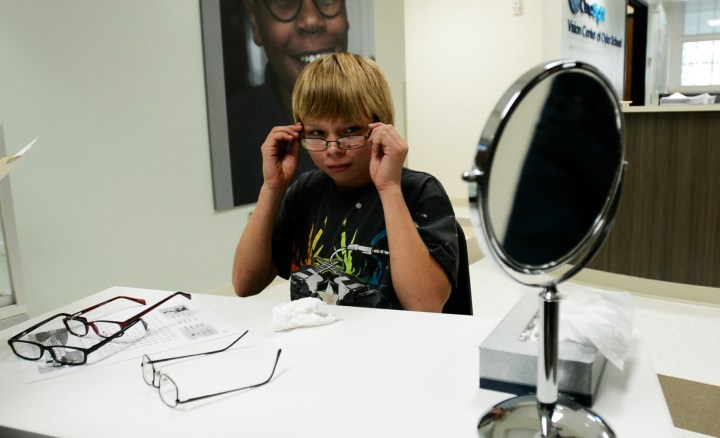 At Oyler, keeping an eye on students’ eyes

At Oyler, keeping an eye on students’ eyes

Walk into Oyler School in Cincinnati and take a right, past the office and through a set of double doors, and you’ll find what basically looks like a LensCrafters. There’s a waiting room with a front desk and big pictures on the walls of smiling kids wearing glasses. In a small room in the back Timothy Drifmeyer — 13 years old, with a mop of blond hair — settles into a big doctor’s chair for his first-ever eye exam.

Optometrist Beth Munzel starts with some questions. “First I want to talk to you a little bit about how you think your eyes are working,” she says. “Do you feel like you see pretty well?” Timothy sees fine. He passed the initial testing with no problems. But Munzel digs deeper. When he reads, she asks, does he have to close one eye, or follow along with his finger? He uses his finger, Tim says.

That’s not a good sign. At this age, Tim’s eyes should be able to track across the page and jump from focusing at a distance — say, on the chalkboard — to the book on his desk. In 7th and 8th grade, the text gets a little smaller and kids read longer passages. Tim has noticed in his English class. His teacher gave the class a novel to read. “She told us to read two to three chapters a night,” he says. “I can barely read it.”

Some testing explains why. It turns out Timothy’s eyes are working too hard to focus when he reads. “Is it hard to remember sometimes what you’re reading?” Munzel asks. He nods. Munzel explains that using so much energy just getting the words into his brain makes it harder to retain those words. And that’s going to make it a lot harder to learn.

This is why an eye clinic belongs at a school, says Oyler’s principal Craig Hockenberry. Oyler is what’s known as a community learning center. It’s a hub for its neighborhood — Cincinnati’s Lower Price Hill — providing services like health and dental care and nutrition to help disadvantaged kids succeed in school. The eye clinic, which officially opened Oct. 12, is the latest in its arsenal. When kids can’t see the board or read well, “it damages them all the way through,” Hockenberry says. “It has a huge impact on student achievement.”

It’s not that kids at Oyler weren’t getting their vision tested. In Ohio, as in most states, school nurses give basic eye screenings every few years. You remember —  can you read the eye chart, and tell green from red? Hockenberry says every year, around 140 Oyler kids fail that screening. In the past, they got maybe one chance to ride the bus to a clinic for glasses. Kids that didn’t make it that day were often out of luck.

Families at Oyler don’t have a lot of money. Marilyn Crumpton with the Cincinnati Health Department says even parents with Medicaid can’t always get their kids to the eye doctor. “Sometimes it’s a choice between going to the grocery or taking that bus trip,” she says. “Poverty interferes with children getting health care.”

Now, those children can walk down the hall during lunch or gym class and take home free glasses within a week or two. The clinic is a partnership between the city and several nonprofits. One of them is a charity called OneSight. It’s funded by the company that owns LensCrafters and Pearl Vision and Sunglass Hut.

OneSight’s Jason Singh says within the first year, the clinic should pay for itself by billing Medicaid. “It’s the first what we would call self-sustaining school-based vision center,” he says. “We really hope to replicate this model nationwide.” Oyler’s clinic won’t just treat Oyler kids. Singh says 2,000 to 3,000 students from Cincinnati public schools will come here for exams.

Now the fun part. Tim Drifmeyer gets to pick out his glasses. Technician Courthney Calvin slides open a glass case and pulls out several frames. Tim tries on pair after pair and frowns at the mirror. “These look sort of girly,” he says.

At this point, I can’t help but weigh in. Remember, Tim is in 8th grade — arguably the most awkward year ever. He just looks so unhappy with his choices. I point out a pair of more boyish black frames. “What about these ones that are a little more square?” I ask.

“Well, he has to get those,” Calvin says, pointing to another case. “That’s the case that they kind of make him choose from.” Like most of the kids at Oyler, Timothy is covered by Medicaid. And Medicaid only pays for certain frames. I feel like a jerk for butting in, but Tim seems emboldened. He points to another pair.

Happy, Tim heads back to class with a note from the doctor. He has permission to skip his homework thanks to the powerful eye drops he had to take. The next morning I find him back at the clinic trying on frames again. Turns out the glasses he liked he could only get in purple. “I liked them, but it just wouldn’t be right for a boy,” he says.

He finds a new pair — very masculine, with wire rims — he says he likes even better.