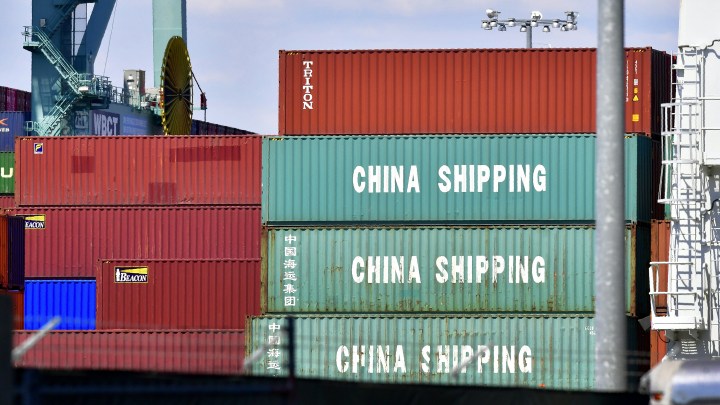 COPY
Containers are stacked on a vessel at the Port of Long Beach in California, including some from China Shipping, a conglomerate under the direct administration of China's State Council. Frederic J. Brown/AFP/Getty Images
Trade showdown

Containers are stacked on a vessel at the Port of Long Beach in California, including some from China Shipping, a conglomerate under the direct administration of China's State Council. Frederic J. Brown/AFP/Getty Images
Listen Now

Factory activity dropped in June for the third straight month, according to a report from the Institute for Supply Management, which regularly surveys businesses on economic conditions, such as how many people they employ and whether they’re getting the supplies they need.

On most of the ISM survey’s metrics, businesses are doing well, said Timothy Fiore, who chairs ISM’s manufacturing survey committee. But new orders — a forward-looking measure of demand for American goods — fell in June to the lowest level in over three years.

Fiore says some of that is because of the strong U.S. dollar, which makes American exports more expensive abroad. But the trade war is making things harder for manufacturers.

According to Fiore, it’s hard to sell stuff abroad when other countries are imposing counter-tariffs on your products.

“46% of our comments were related to tariffs,” Fiore said. “And of that, 9% included the comments around the Mexican border.”

Another survey out today from IHS Markit says factory activity in the euro zone has been contracting for five months. The trade war is a big part of that contraction, according to Liz Ann Sonders, chief investment strategist at Charles Schwab.

“We’re in a global manufacturing recession, and there’s nothing in numbers like this that suggest we’re pulling out of this anytime soon,” Sonders said.

There are plenty of other complicating factors complicating global demand, said Veronique de Rugy, a senior research fellow at the Mercatus Center at George Mason University: Europe’s economy continues to slow, labor markets in Europe are uncertain and Brexit is further entangling the continent’s economy.

Still, de Rugy said, a de-escalation in the trade war could help manufacturers.

“You lift the tariffs, and suddenly, overnight, you reduce production costs quite significantly,” she said.