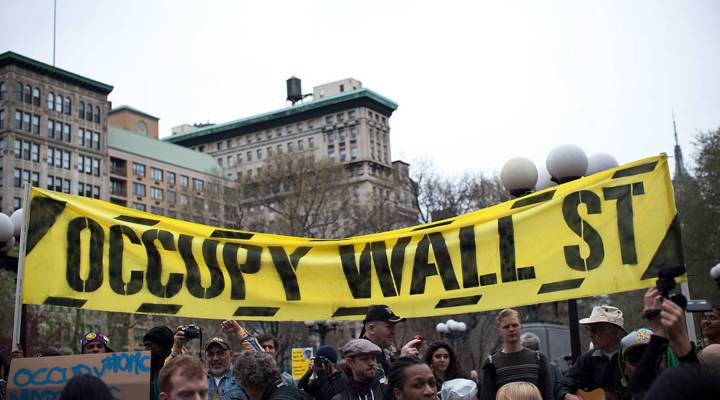 An Occupy Wall Street banner is seen in Union Square at the end of a march from Zuccotti Park to Union Square on in New York City. Andrew Burton/Getty Images
Listen Now

Monday marks the one year anniversary of Occupy Wall Street. The day protestors set up camp in Zuccotti Park in New York, throughout the fall camps sprang up around the country. Twitter and Facebook were abuzz. Local TV news did liveshots from tents. But the demonstrators were eventually evicted.

David Meyer teaches sociology at the University of California at Irvine and he’s spent a lot of time studying social movements. Meyer said that it’s too early to say what the effects of the Occupy movements are, but he said it did change political rhetoric.

A change in rhetoric is a small step towards policy change. Meyer pointed out that President Lyndon Johnson started adopting the
Civil Rights movements language before pushing the Voting Rights Act.

“What the movement did was pull the debate back a little bit to the left,” Meyer said. “Suddenly, jobs and equality — political and economic equality — were part of the discussion.”

However, Meyer thinks that the Tea Party may gain more clout, because it worked through mainstream politics and also gave supporters a range of options to participate — two things the Occupy movement did not do.

“The Tea Party built institutions,” Meyer said. “Five years from now, you’ll look through the phonebook and you’ll find some group with Tea Party in its name, and somebody’s going to answer that phone. And it’s not clear whether Occupy is going to generate something comparable.”

Listen to the audio above to hear more about Meyer’s observations about the Occupy movement and also letters members of the movement wrote to financial institutions.