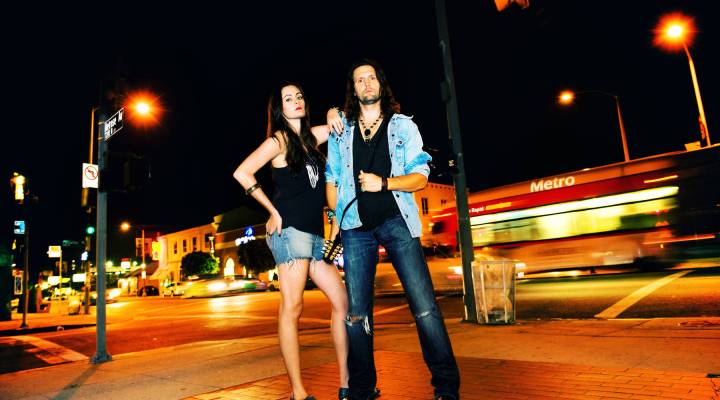 A marriage on and off stage

A marriage on and off stage

Tess Vigeland: Before we leave the subject of work and happiness, how happy would you be working with your spouse? Plenty of people do it. The Small Business Administration says almost 90 percent of U.S. business are family-owned or controlled, though it doesn’t break out how many couples work together. But managing a relationship is already a delicate business. Throw money into the mix and things can get even more complicated.

Nancy Farghalli: Wing and Hollow is playing a six-song set. In between the music comes the banter.

Jill Lamoureux: I’m sensing a little attitude from you.

Jill: Sorry for the squabble for the onstage. It is probably inappropriate.

It might be inapprpopriate except they’re married. Jill Lamoureux is the vocalist. And her husband, Haven plays the guitar. They’ve been married for almost two years. She’s a classically trained singer. He’s a self-taught musician.

Tonight, they’re in a small L.A. bar performing songs off their second album, “North of Nowhere,” which they wrote and distributed by themselves. It’s their family business.

Jill: We have two more songs for you tonight. It has been such a pleasure.

There are about 15 folks in the audience. They paid eight bucks each. Wing and Hollow splits the take with the bar if they can clear a certain number of tickets. Tonight, they didn’t make any money.

They’re a professional act, but their band doesn’t generate enough to live on. So they have other jobs. Jill has a regular singing gig at an L.A. hotel. She usually earns $200 an hour. And Haven edits and directs documentaries. His day rate averages about $675. Still, they know they are on the working class side of the music equation right now.

Jill: So here we are in the dining room/office/music room. As you can see there are instruments everywhere.

Haven: This is a little mandolin.

And seven guitars, a tambourine, a drum pad, a keyboard, a computer and an amp. All in this one-bedroom apartment. Which is home. Which is the office, where your co-worker is your spouse. And where you write, fiddle, tweak and practice.

Like marriage, Jill says writing music is emotional. Your personalities can come out. You’ll have moments of collision.

Jill: We’re so both emotionally invested in the music that we write and we want it to be so good. And we can get in arguments and get frustrated, because that’s just part of the song writing process.

Haven: I think one of the difficulties in working together so closely is knowing when it’s time to write and when it’s not time to write. For me, I’m always playing the guitar around the house. And I think I push it a little bit hard sometimes into a time where I feel like constantly be writing. And Jill’s like, “Let’s just be married right now.” And for me, I have to find time to go, “OK cool, this is marriage and this is music.”

Their dream is to play fulltime as Wing and Hollow. It’s not cheap putting out your own product. It cost almost $3,000 to produce their second CD. And then another $1,000 to mass produce. They’ve played 12 shows this year. And they’ve come close to recouping the album costs, but it takes a lot of work. They book their own shows. They do their own marketing. The platforms have increased, so has the workload and the financial investment.

Haven: The costs kinda start piling up. But then it is up to you. Once you have it — seven boxes filled with a thousand CDs show up at your house — and you’re like, “OK where do we go from here?” You keep pushing the boulder up the hill, in a sense.

Jill: If it was a boulder that we were trying to push up a hill, that would be something that we didn’t want to do. And instead, I just think of it as a stepping stone. It’s not the last album we’re going to make and we know that.

And both agree, you spend money on what you love. And hope one day you can get that money back.