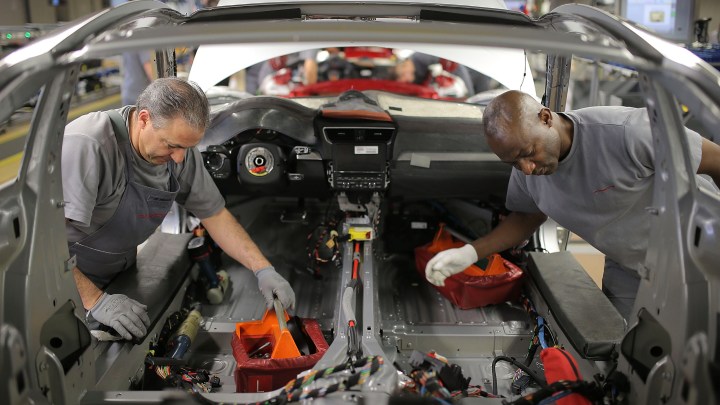 COPY
If California wants to reach carbon-neutral transportation by 2045, it must recruit and train more people to work on vehicles and infrastructure. Thomas Niedermueller via Getty Images

If California wants to reach carbon-neutral transportation by 2045, it must recruit and train more people to work on vehicles and infrastructure. Thomas Niedermueller via Getty Images
Listen Now

University of California researchers recently presented a road map for achieving zero net emissions from transportation in car-loving California. Getting there, the researchers said, will require a massive shift to electric vehicles — and retraining workers to make those vehicles and keep them running.

Albert Baena, 27, has already made that career shift. Last year he was working as a prep cook at a restaurant and wasn’t satisfied with his job.

“I said to myself, ‘I would like to be a part of something bigger,’” he said.

An employment counselor suggested he consider a new training program to become an electric bus manufacturing technician. The program was through a local community college, but the classes would take place at Proterra, a company that builds electric buses in the City of Industry, near Los Angeles.

Baena Googled the company and said he was sold.

He completed the nine-week course and then was selected for a union job at Proterra that starts at $20 an hour. He works on the company’s battery-production line doing “anywhere from wire crossing and connections to working with robotic technology.”

Now, Baena feels great about his career, he said.

The program has also benefited Citrus College, in Glendora, California. Instructor Mariano Rubio said it’s been wonderful to learn about an emerging industry from Proterra’s engineers. There he can observe and ask, “So how do you guys put this together? And what materials do you guys use for this?”

In addition to making more electric vehicles, researchers said, California needs major improvements in its EV infrastructure. For instance, chargers: They have to work.

Kameale C. Terry knows a lot about electric charger problems. Her previous employer was a charging-station software company that had a hard time finding people to fix broken-down stations.

“We were using electrical contractors that could take seven to 14 days to get on-site,” she said.

Last year, she and a business partner launched ChargerHelp!, an app that diagnoses problems with charging stations and sends technicians — who the company trains — out to fix them.

EV techs’ starting pay is $30 an hour, Terry said, and they are full-time employees, not gig workers.

“I thought our industry had to do a better job of creating equitable-paying jobs,” she said.

In their last round of hiring, she said, earlier this year, ChargerHelp! had 1,600 people apply for 20 positions.