A tough decade for the middle class

A tough decade for the middle class

Tess Vigeland: President Obama and Gov. Romney are traveling around the country to rally the middle class vote. A report out today from the Pew Charitable Trusts finds both candidates are preaching to a group that’s very worried about maintaining its middle class status. And for good reason.

From our Wealth and Poverty Desk, Shereen Marisol Meraji has more.

Paul Taylor: The sense of stagnation in life that the middle class feels is very real, it’s very sharp, it’s supported by data.

Paul Taylor is the executive vice president of the Pew Research Center. Pew looked at Census and Federal Reserve data and found that the middle class ended the last decade…

Data from the Pew Research Center

And Taylor says, you can’t blame it all on the Great Recession, data shows that middle class income has been stagnant for years.

Older middle-class Americans, like Florida resident Sara Pankaskie, felt the most secure in their status during this rough decade.

Pankaskie: I own my own home.

They bought their homes before the bubble, paid off their mortgages, and live on a combination of retirement pensions and social security. But, Pankaskie says her children are much less secure.

Pankaskie: It hasn’t lived up to their expectations, the…the American Dream.

Carter went back to school, in his late 40s, because he wanted a better job. He’s finishing up his master’s degree in elementary education and drained his retirement and savings to do it.

Carter: I am frustrated, but at the same time it’s still one of the greatest countries in the world, if not the greatest and I’m glad to be living here. It’s just frustrating to know it could be so much better, you know?

That frustration mixed with muted optimism is a theme in the study. Sixty-seven percent of middle-class Americans surveyed still believe with hard work you can get ahead. 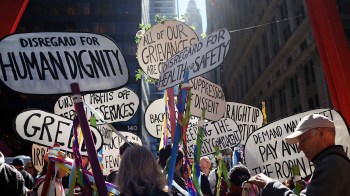