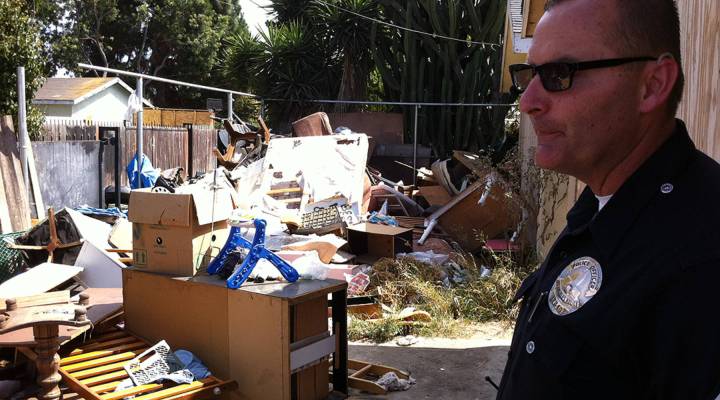 Who is responsible for foreclosed homes?

Who is responsible for foreclosed homes?

Tess Vigeland: I lost track, a long time ago, of how many reports we’ve done on the foreclosure mess. How many homeowners we’ve talked to, banks and politicians. How many solutions have been proposed and ignored. Four, five years after the bubble popped, the narrative hasn’t changed much.

But today, a perspective that maybe you haven’t heard before from Officer Eric Young of the LAPD Southeast Division.

Eric Young: OK, I’m gonna go to the east side of division, which is north of the Imperial Highway and east of Wilmington Avenue.

Vigeland: So as we head over there, talk us through what you have seen over the last four years as the housing bust has hit this divison.

Young: Just real quick where we’re goin’ is we’re goin’ into Watts and it’s not, you know, I’m not gonna say something terrible’s gonna happen, but you never know what’s gonna happen around here. I mean on occasion, police cars get shot up.

We were heading out on a tour of what the foreclosure crisis has wrought in Watts, an area of Los Angeles infamous for riots and gangs — and these days, boarded up, vacant homes. More than 1,500 foreclosure actions over the last year in a single zip code, according to RealtyTrac. And before we arrive in that zip code, a warning:

Young: You know I’m not gonna be doing any traffic stops or anything like that with you guys in the car. For safety reasons, though, if anything happens, push this orange button on my radio. If I can’t do that, this little orange button right here, and they’ll find us, OK?

Officer Young has served in southeast division for 12 years. His area of responsibility is the smallest in size, highest in crime. But it’s the evolution in the type of crime he battles that brought us to this ridealong.

Young: Four years ago — no, I’d say three years ago — it was probably at its worst. On any given day, I’d probably have 45, 50 vacant homes in my area. And they blight it brings to the street, they just look like crap.

There are 68 documented criminal street gangs in LAPD southeast division. Because of the foreclosure crisis, those gangs and the area’s homeless population have a whole lot more housing to choose from.

Young: This is an interesting place right here. It’s been vacant for about two and a half years. There was a homicide in that garage that went unnoticed for quite some time.

Vigeland: What is “quite some time”?

Young: Probably a couple weeks before we got to it.

Young: Probably. It was pretty much based on the smell that it created. We’re gonna park the car here.

We parked in front of a boarded up, split-level house, fronted by a wire fence w ith a big hole cut out of it. The lawn was dried up and brown.

Our story was prompted by lawsuits filed by the City of Los Angeles against the banks that own these kinds of foreclosed properties. The city claims the banks should be responsible for the upkeep of abandoned homes. Courts have yet to rule.

This house on Kalmia Street is in foreclosure. 2,300-square feet, list value $115,000 on the real estate website Redfin.

Young: As of this morning, these homes are owned by JPMorgan.

Vigeland: How long have they been unoccupied?

Young: At least. And the fence and the wood on the windwos and everything, that was done by the city. Hey who you with?

Turned out that morning a crew from Field Asset Services showed up at the house. FAS is contracted by banks to send clean-up crews to abandoned properties all over the country.
William Perez was the crew chief for this job on Kalmia.

People say it’ll slow down. But with the amount of houses that are on foreclosure already, I’ll be working for the next two years straight.

Perez: Hello? Hey Ben. Yeah, I don’t know if I can finish it today, because there’s a lot. There’s I think 60 cubes

Sixty cubes is 60 cubic yards of trash on this property. The city is supposed to fine property owners — i.e. the banks — $1,000 a day for houses that aren’t cleaned up. But officials say they don’t have the budget or manpower to track down and inspect all the foreclosures in L.A. So the fines go uncollected.

Young: Be super careful where you step you guys. But this is typical of what you’ll find in a vacant home around here. This is very typical.

Officer Young made his way to the back of the property, through broken window glass and more trash to a garage, strewn with filthy mattresses and drug paraphernalia and plastered in graffiti.

Young: OK, the gang took it over. This is the Fudge Town Mafia Crips, that’s their gang sign. So they were here first, and in come of the homeless people, the narcotics users and this is… a good dig. I mean, you’ve got four walls and a roof, living large.

Vigeland: This is the detritus of actual living in here.

Young: I mean, this is someone’s house. You know, someone lives in the garage. Please be careful where you step. I know I keep saying that, but…

Gary Kishner: In this particular property in Watts, we’ve had crews out at the property on average once a week for the past four months.

Gary Kishner is a spokesman for JPMorgan Chase.

Kishner: And unfortunately at this particular property, individuals in the community have been dumping.

Banks facing this same problem across the country also say they are not in the business of owning and maintaining homes. They make loans.

Jenny Scheutz of the USC Price School for Public Policy says corporate entities simply are not equipped to handle millions of empty foreclosure.

Jenny Scheutz: They don’t want to be maintaining the lawns, they don’t want to be doign the exterior maintenance, doing the security. And they also haven’t been able to sell them and get them out of the inventory, becuase we have such a glut at this point. So you really have an entity owning these that doesn’t know how to manage them.

And the question of responsibility gets even more complicated if the loan was securitized, and the house is technically owned by a batch of investors all over the world.

All of that is, quite frankly, irrelevant to the people living near these blighted homes, whether they’re in multi-million dollar subdivisions or far down the economic scale here in Watts.

Elaine Brown: That many people going over there to the vacant properties, they urinate and trash…

Forty-eight-year-old Elaine Brown came out of her home across the street. She’s lived there since March.

Brown: And you know, I could come home late at night and it’s so dark over there, I can’t see when I’m coming home who’s over there, who can come out of there and jump out on me.

Vigeland: And how do you blame for this situation?

Vigeland: What do you think they should have to do?

Brown: Really to be honest with you, because it’s moving too slow for a buyer, tear it down. And that’s it.

We left Kalmia Street with Perez and his crew still figuring out just how much junk they’d be hauling away. The owner of a corner store nearby told us all the foreclosures were keeping people from buying other homes in the neighborhood, which means fewer customers for him.

And Officer Young? He just wishes he could stop dealing with all this property crime and go back to community policing.

Young: I’ve gotta be honest with you guys — I was slightly embarrassed to show you what I showed you today. Because this is my neighborhood, I’m responsible for this neighborhood. On the other hand, I sometimes find myself asking, “Where do I draw the line between police officer an dealing with the mess that other people created?” It’s not necessarily a crime in progress. But with this job, I’m somewhat expected to do that. But it is getting better, I can tell you that. But I don’t know how long it’s gonna take.

Vigeland: How are you seeing that manifest?

Young: I just don’t have nearly as many vacant homes as I used to have.

Vigeland: Well, Officer Eric Young, really appreciate the tour. Thanks so much for talking with us today.

Young: I enjoyed having you guys. I always like a little company in the car with me. So that’s cool.