Carpooling finally catching on thanks to apps and the web

Carpooling finally catching on thanks to apps and the web

Everyone knows carpooling is a great idea in all kinds of ways but if you drive down a busy freeway during rush hour you’re still likely to see a whole lot of people driving alone. It’s just hard to round up people who are going your way at the time of day you’re going there. Apps to the rescue! The New York Times reports on a boom in carpooling as apps and social networking sites begin to solve the logistical problems.

Long-distance travelers as well as commuters are connecting on sites like Zimride.com, Ridejoy.com, Avego.com, Nuride.com, Rideshare.com and eRideShare.com.
This summer, a German company with a quintessential American name,Carpooling.com, will try to break into the United States market with a trial run in the Northeast. In June, the company announced that 30 million rides had been offered through its 10-year-old network, which now has 3.8 million registered users.

The challenge is a steep one:

On any workday, however, most drivers are riding solo. The percentage of people car-pooling has hovered near 10 percent for several years, according to Census survey data. About 5 percent of commuters use public transportation, and 76 percent drive alone.

I plan to take a carpool to celebrate the upcoming Things That Didn’t Catch On Day. We’ll have some wraps and maybe catch a Chris O’Donnell film festival. 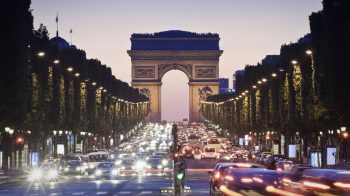 In midst of transit strikes in France, carpooling surges