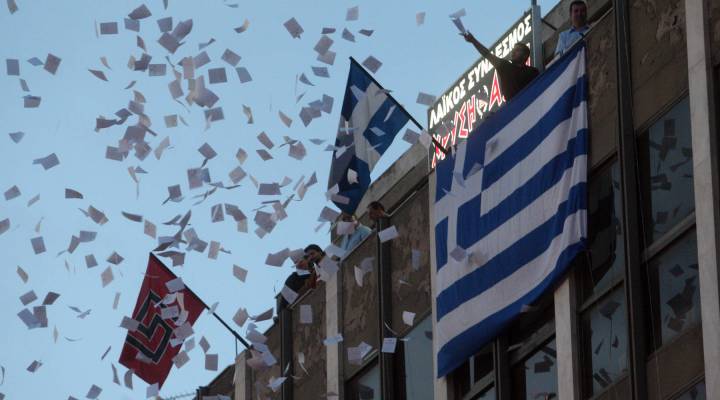 Greece's two main political parties suffered big losses in state elections on May 6, throwing into doubt the eurozone state's austerity plans after a strong showing by protest groups, including the neo-Nazis party Golden Dawn, which is set to enter parliament for the first time since 1974. SAKIS MITROLIDIS/AFP/GettyImages
European Debt Crisis

Greece's two main political parties suffered big losses in state elections on May 6, throwing into doubt the eurozone state's austerity plans after a strong showing by protest groups, including the neo-Nazis party Golden Dawn, which is set to enter parliament for the first time since 1974. SAKIS MITROLIDIS/AFP/GettyImages

Stacey Vanek Smith: Worries about the financial stability of the Europe are dominating the markets this morning. That after French voters elected Socialist candidate Francois Hollande. Hollande has promised to ease some of France’s austerity measures.

And in Greece, voters punished the country’s two incumbent parties, with the majority of the votes going to fringe parties that have campaigned against austerity.

George Christides is a freelance journalist in Greece. He joins me now. George, good morning.

Vanek Smith: George, you’re in Thessaloniki right now. What is the mood like?

Christides: There are two groups of people out in the streets celebrating; it’s the far left-wing parties and the far right-wing parties. These are the two major winners of the election. Everyone else is contemplating the next day.

There’s also a sense of relief that all those people who have governed Greece for the past few decades – they will not be appearing in parliament.

Vanek Smith: What does this vote mean for Greece?

Christides: This vote means that the Greek people are fed up with both the political parties that have ruled Greece for the past three decades, first of all. And second of all, they believe that the Eurozone as a whole should follow a new direction more focused on growth and less on austerity, pay cuts, and the like that have actually devastated the Greek economy.

Vanek Smith: From what I understand right now Greek party leaders are in talks today to form a new government. Do we have any idea what the outcome of that might be?

Christides: I believe that these efforts will prove futile, and by mid-June we’ll be heading towards a new election, because there is no way that a Socialist party that has been devastated in the polls will agree to form a coalition government with the conservatives. And left-wing parties – which are the big winners of this election, along with the Neo-Nazi Dawn Party – they will not be able to form a government either.

So I think there’s an impasse and unless there is huge pressure from our creditors to actually reform the government, they will not be giving us any more money from the bailout, then I believe by June there will be a new election.

Vanek Smith: What do you think this means for Greece’s place in the European Union and in the Euro.

Christides: Interestingly – and this is a contradiction of sorts with the election – that 70 percent of Greeks would like to remain in the Eurozone. They are not blind to the benefits of the common currency. They know that in case of a return to Drachma, there deposits would evaporate, that imports would become too expensive, that tourism would be dealt a huge blow.

But they don’t believe that they should sacrifice everything to remain in the club. And then also there’s no prospect of getting out of this, even in the medium term. So they are now hoping that with the election of Francois Hollande in France that Germany will be isolated and they will change course. This is the hope here in Greece right now.

Vanek Smith: George Christides is the former economy editor for the Macedonia newspaper. George, thank you.

Christides: Thank you very much.

What teachers in Greece think about the latest bailout