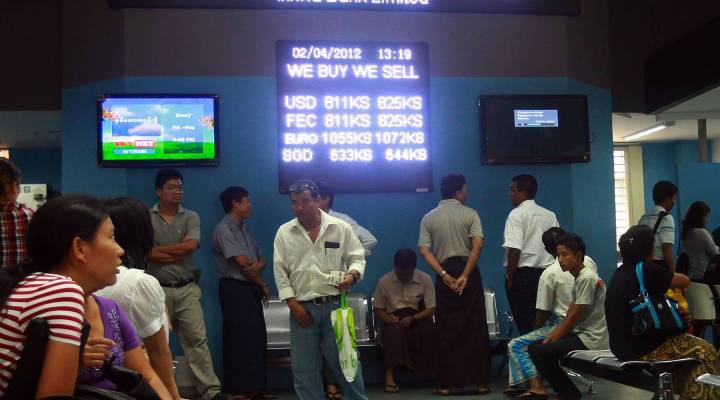 As politics shift in Myanmar, so do economics

As politics shift in Myanmar, so do economics

Turnall: Well, the move today to float the currency and go to one unified exchange rate really is a very important one. Myanmar has long had a terribly divided exchange rate system. It’s also an extraordinary vehicle for corruption, and is generally, I think, just a symbol of the irrationality that has sometimes been there in the economy.

Smith: Tell me what the country’s currency situation has been like — because it’s a little different.

Turnall: Up until recently, Myanmar has had a dual exchange rate system, where it’s had an official exchange rate of 6 kyat — the name of the country’s currency — to $1 U.S. Whereas in the marketplace, that kyat is actually exchanged at up to around 1,000 to $1 U.S. So we’ve had two extraordinarily different rates: the official rate, which has really only ever been able to be used by very senior officials and generals in the past regime; and then that market rate, which has been more or less available to everyone else.

Smith: And one final question: how will this affect Myanmar’s economy. It sounds like you think it will help it?

Turnall: I think it’ll affect it in profound ways. It will inject, I think, a degree of rationality into a system that has sometimes lacked that. It’ll be important, I think, in sending a signal to international investors and traders, that perhaps Myanmar is now open for business. And then finally, it will greatly improve the country’s public accounts — its internal revenues — by making sure that the country’s export earnings are properly recorded.

Smith: Sean Turnell is an expert in Myanmar’s economy. He joins us from Macquerie University in Sydney. Sean, thank you.