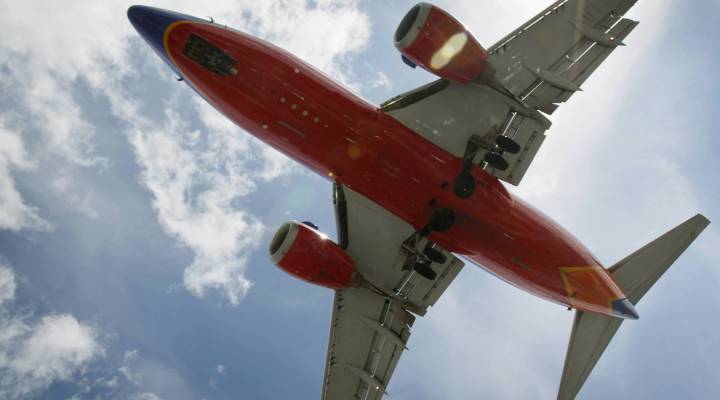 COPY
A Southwest Airlines passenger jet prepares to land at Midway Airport on April 5, 2011 in Chicago, Ill. The airline has said it will follow other airlines in rising prices a notch to deal with high gas prices. Scott Olson/Getty Images
Mid-day Update

A Southwest Airlines passenger jet prepares to land at Midway Airport on April 5, 2011 in Chicago, Ill. The airline has said it will follow other airlines in rising prices a notch to deal with high gas prices. Scott Olson/Getty Images
Listen Now

Et tu Southwest? The discount airline announced that it will raise fares between $4 and $10. Southwest said it will help it offset rising fuel prices everyone from Delta to United followed suit within hours of the announcement.

Oil prices on the rise again this morning. Stricter sanctions on Iran have pushed oil over $125 a barrel this morning.

Home prices were flat in January according the Case Shiller Index of 20 metro areas. That’s after five months of declines in prices. Home prices in Miami, Phoenix and Washington D.C.

Consumer confidence was down in March due mostly to a spike in gas prices.

A pizza company in Dubai apparently thinks it’s too difficult for customers to order a pizza by phone or online. So the company has created a refrigerator magnet. And all you have to do is tap the magnet and the pizza is ordered. Could be dangerous though if you get impatient – and keep tapping it over and over again if the pizza doesn’t come right away. Well dangerous or delicious… depending on your perspective.

A new study in the Archives of Internal Medicine found eating chocolate helped people lose weight. And here’s the best part: The amount of chocolate they ate didn’t seem to matter. It’s apparently how OFTEN you eat it. People who indulged at least a few times a week weighed less than people who ate it occasionally. Scientists think that even though chocolate is chock full of calories, it also has ingredients that promote pound shedding. So eating chocolate helps you lose weight. Really. Maybe I’ve been doing it wrong.