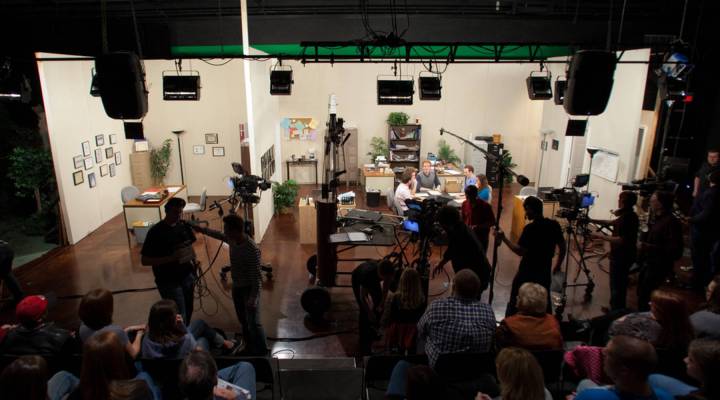 On your TV this fall: The sluggish economy

Horizon Media's Brad Adgate looks at all the new scripted pilots that have been ordered by the big television networks. He finds one big underlying theme: The sluggish economy. tylerhoff / Flickr

On your TV this fall: The sluggish economy

Horizon Media's Brad Adgate looks at all the new scripted pilots that have been ordered by the big television networks. He finds one big underlying theme: The sluggish economy. tylerhoff / Flickr

Tess Vigeland: Look around you, it’s spring everywhere. In some parts of the country, you might even be persuaded it’s summer.

But Hollywood has a different name for this time of year: pilot season. This is when the five big networks — ABC, NBC, CBS, FOX and CW — greenlight new scripted shows. In all, 89 new pilots have been ordered for the 2012-2013 season.

Here to talk about them is Brad Adgate, senior vice president and director of research at Horizon Media. Welcome to the program.

Brad Adgate: Thanks for having me.

Vigeland: So 89 pilots this season, and I know that you have categorized these under some different categories. And there’s one that we were particularly interested in called “The Sluggish Economy.” Tell us more about that.

Adgate: This year, there seems to be quite a number of shows that are dealing with families on the down and out — people losing their jobs, people moving back in with their parents — and it just kind of struck me as kind of odd because it just seems that these shows probably would have been better off if they were in development three years ago instead of today.

Vigeland: Right. Well let’s talk about a couple of the shows on offer. There was something called “Malibu Country” that’s been ordered by ABC; CBS has three projects in the works. But give us an idea of what some of these shows are about.

Adgate: Well, “Malibu Country” is a show, it’s a comedy — in fact, all of these shows are comedies — and it…

Vigeland: Because bad economies are so funny!

Adgate: It’s easier to make light of, I guess, as a comedy than a drama — nobody wants to see an hour-long of these types of shows.

Vigeland: Right, you’ve already got it in real life, anyway.

Adgate: Yeah, that’s right. Well “Malibu Country” is a show in development at ABC, a comedy that stars Reba McEntire. Her husband cheated on her, so she moves out to Malibu with trying to resurrect her singing career — I hear she has a pretty good voice — and you know, brings her kids, and she just tries to start all over again.

Vigeland: The other one that caught my eye was “How to Live with Your Parents for the Rest of Your Life,” and I think that’s something a lot of folks can relate to these days.

Adgate: Yeah, in more ways than one. What struck me is how long the title is; I thought “How I Met Your Mother” was long, but this is about twice that. But that show stars Sarah Chalke, who is familiar with TV viewers from her days at “Scrubs” and even before that, “Roseanne.” And what happens is she’s down and out, and she just moves back in with her parent. The opposite philosophical differences that they have will probably be part and parcel of that possible comedy.

Vigeland: So you touched on this earlier, but I guess the question here is: What if the economy does improve? Are these programs then, they’re not nearly as salient?

Adgate: That’s true. I mean, you bring up a very good point. And plus I think a lot of these shows don’t really — they have to be funny. If you want to think of a show that really resonated with a lower-income family that was funny and had great characters, it was “Roseanne,” back about 25 years ago on ABC. More people were better off when that was a hit. And ironically, she’s in a show this year called “Downwardly Mobile,” a comedy on NBC, co-starring with John Goodman of all people. And it’s about people living in a mobile home in a down, sluggish economy.

Vigeland: I mentioned that there was some-100 pilots or so in production — how many of those end up generally making it?

Adgate: Probably about a third. Really you don’t know until May, when they come out and during the upfront weeks, when Hollywood meets Madison Avenue and announce their schedules. And some of these shows may be mid-season replacements, but even then, it’s very hard for a first-year show to get any traction. The number of shows who make it past the first year is really one-third of that one-third.

Vigeland: Brad Adgate is senior vice president and the director of research at Horizon Media, and he joined us from our New York studio. Thanks so much and happy viewing.

Adgate: Same to you, Tess.