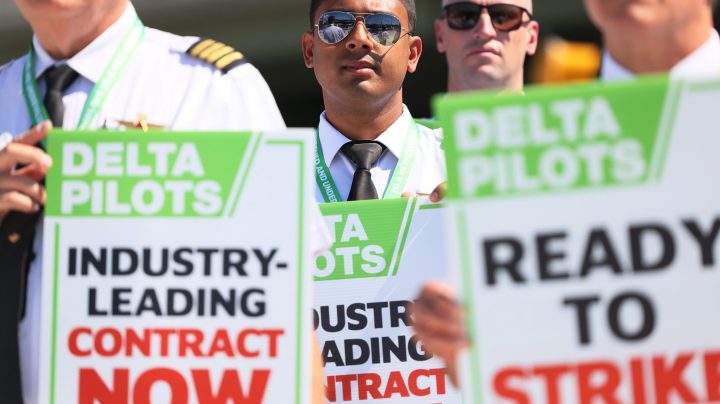 Contract negotiations between pilots and some of the biggest airlines are getting contentious. This week American and United pilots both rejected tentative contract deals, and Delta pilots voted to authorize a strike if negotiations break down.

A wave of buyouts and early retirements during the pandemic has already left remaining pilots working record amounts of overtime. The growing tension is threatening disruptions just as the busy holiday travel season approaches.

Contract talks often get strained, but not usually all at once, said consultant Jerry Glass of F&H Solutions Group. (His firm represents airlines in negotiations but is not involved in any of the current pilot contracts.)

“There are more pilot contracts open for negotiations than I have ever seen in my 40-year career,” he said.

Many of them were put on hold during the pandemic. In that time, wages lagged and frustrations built, said Captain Evan Baach, a Delta pilot and union spokesman.

“We’re spending more time away from our families, we’re working longer days, we have shorter nights at home,” he said. And they’re being paid wages negotiated in 2016. Pilots are now pushing for significant raises and better quality of life provisions.

They have a lot of leverage, said travel industry analyst Henry Harteveldt.

“You know, at the same time, while the airlines know they’ve got to be generous they can’t spend foolishly,” he said. Airlines are making money again, but an unstable economy could undo that.

The building conflict is unlikely to lead to immediate disruptions, said law professor Michael LeRoy at the University of Illinois at Urbana-Champaign.

“It doesn’t look like they’re rushing out to get their picket signs today,” he said.

Airlines, like railways, are subject to federal mediation due to their importance to the economy, LeRoy said, so negotiations rarely lead to strikes. Rarely, but not never.