Searching search engines for the sound of music

Searching search engines for the sound of music

Kai Ryssdal: It’s tempting to set up a story on digital technology by quoting Scott McNeely, one of the guys who founded Sun Microsystems. “You have no privacy,” he once said. “Get over it.” All the more appropriate given today’s news. And, to some extent, you can see how that might be true with web surfing and tracking your cell phone.

But the music you listen to? One of the fastest growing music labels out there is a barely known company called X5 Music Group. It releases no new music. Almost all its sales are digital. And yet last year, it was the No. 2 digital classical music label in America. They got there by studying what consumers want to buy from the moment they start searching for it.

Jennifer Collins: You might think people looking for this:

Search for this: “Beethoven’s Fifth Symphony in C Minor.”

That’s Scott Ambrose Reilly, CEO of X5 North America, one of the biggest music companies you may never have heard of. He says most people looking for this:

Search for this: “classical music.” Knowing how average people search for music — especially classical music — has helped X5’s sales grow 70 percent a year for several years. It brought in more than $10 million in revenue last year in mostly online sales.

Here’s how: X5 scours Google and other search engines and studies online marketplaces like iTunes and Amazon. Ross Malaga teaches the science of search engines at New Jersey’s Montclair State University. He says X5 is hunting for popular key words.

Ross Malaga: They can see what people are already searching for online.

Then the company –- which licenses dozens of back catalogs –- creates compilation albums tailored to the most prominent searches: “Classical Music for Meditation and Yoga.”

Most albums sell for less than $10. Keith Hatschek directs the music management program at the University of the Pacific. He says X5 — as well as smaller labels like Razor & Tie and Rostrum — represent a fundamentally different business model in music.

Keith Hatschek: You build the audience first. You don’t create the product and then try and create demand.

Steven Rosenbaum: What you’re seeing is kind of a new kind of retailer.

Steven Rosenbaum is the author of “Curation Nation.”

Rosenbaum: That doesn’t have goods and services on a shelf, but simply has the ability to look at that noisy big world of things and say, “Here’s 10 things you should see today.”

Rosenbaum says lots entrepreneurs are using crowdsourcing sites like Kickstarter and Quirky to figure out the types of products people want before those products are created.

Rosenbaum: X5 is a canary in a coal mine. And you’re going to see more and more consumer goods built after a trend evolves that wants them.

X5’s Scott Ambrose Reilly says to cash in on those trends the company needs to win the search.

Reilly: You want to make sure the genre of the album your trying to push is in the title.

That may sound obvious, but think of how many classical albums don’t say “classical” in the title. So yeah, X5 titles can be pretty boring. Its most successful release so far:

Reilly: “The 50 Most Essential Pieces of Classical Music”

That title has sold more than 200,000 albums and it’s been in the iTunes top 10 classical for over three years. But if it fell out of favor, it would simply disappear and something else would take its place. X5 releases as many as 400 albums a month. There’s always another mix to be made. How about “Classical Music For Linsanity?” 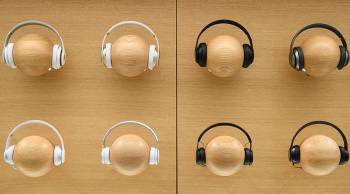