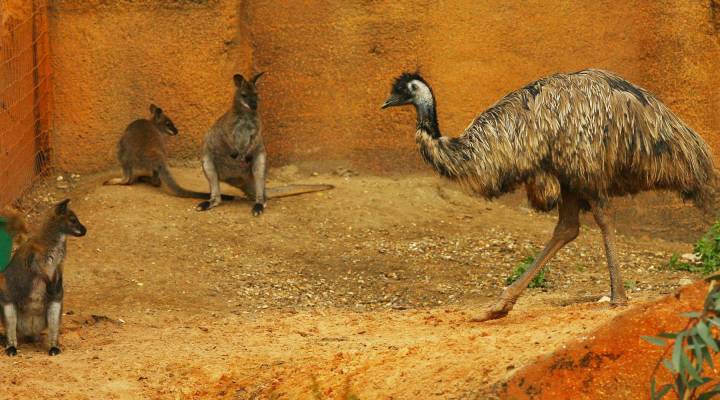 COPY
Emu's and wallabies occupy an exhibit at the London Zoo in England. An escaped emu has been wandering in parts of Vermont, and it turns out, the owner doesn't want it back. Daniel Berehulak/Getty Images
Mid-day Update

Emu's and wallabies occupy an exhibit at the London Zoo in England. An escaped emu has been wandering in parts of Vermont, and it turns out, the owner doesn't want it back. Daniel Berehulak/Getty Images
Listen Now

Oil prices have also jumped. They are at a nearly nine month high after Iran cut exports to Britain and  France. Benchmark crude is near $105 a barrel.

Markets are also happy with  news from China. The country announced it’s going to limit the amount of money banks have to hold in reserve.. That would free up cash for lending, which could lead to more economic growth.

And we’ll stay in New England for our last story of the morning: an escaped emu. The 150 pound bird escaped from a farm in Grand Isle, Vt. five weeks ago. It’s popped up around town. There’ve been the emu-equivalent of goose chases — emu chases, I suppose. But so far no ones been able to catch it. Not that the emu’s owner minds. According to Vermont’s WCAX TV, the farmer has posted an ad in the local paper: Free emu, if you can capture it.