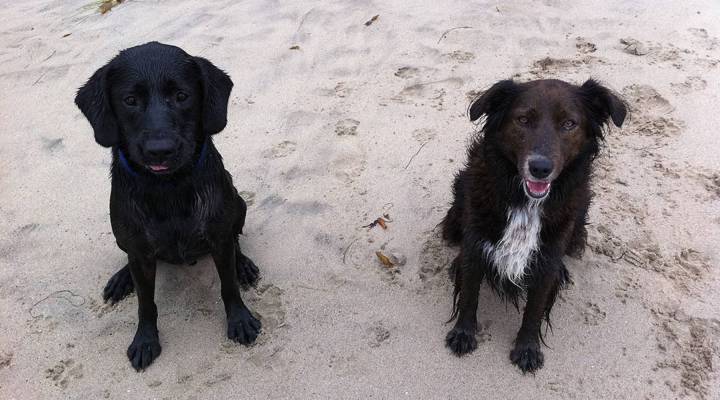 Tess Vigeland: We’ve just heard about the decision one pet owner had to make in deciding what to spend on his dog’s care.
But for most of us, including him, that decision goes far beyond the practicalities of our budgets. It’s an emotional decision, often a wrenching one.

So earlier this week I invited some people over to my house to talk about how they deal with those questions. Sarah Sypniewski is the co-author of “Dog Photography for Dummies” and lives in Santa Monica. Mia Dunn is a friend of mine who used to work for the Pasadena Humane Society and lost her dog, Maggie, a little over a year ago. And we were also joined by Dr. Stacey Fuchino, a veterinarian in Redondo Beach. My dogs — a black lab and a border collie — provided the background music to our conversation, which started with Mia and Maggie.

Mia Dunn: We figured that we probably, in the course of her lifetime, probably spent well over $25,000 on her. Of course that includes the cost for having a pet regularly — the grooming and the food, normal vet visits. But she had three tumors that had to be removed over the course of her lifetime. She had chronic pancreatitis, which was a very expensive thing to treat. It was quite a bit of money.

Vigeland: Do you think the calculation would’ve been different had she been younger?

Dunn: Quite possibly. But she had a happy long life at that time, and I didn’t see any reason to spend that money. And then if it did turn out it’d be something and we decided not to do anything about it and then something happened… It was just better to not know and just letter be.

Vigeland: Sarah, how about you? What kinds of costs have you incurred? You have five dogs.

Sarah Sypniewski: Yup. We have five, and the oldest is 13, the youngest is a year and a half, so we really span the gamut there. And we can spent anywhere from $3,600 to about $5,000 a year, depending on what’s going on. And about a year ago, we got pet insurance, anticipating that it would start to rack up as they continue to age. We have to constantly balance the care that we give our dogs. We want to give them the best, and we’ve been able to give them the best. Up until recently, things have changed. Our budget and our income levels are significantly different, so that comes into play too, which I imagine that’s probably true for a lot of people. Over the past few years, things have changed, so now what do you do? So for us, it’s a lot of preventative care. We try to spread out the major costs and not let anything go for too long — and that’s how we stay on top of our costs.

Vigeland: But given, Sarah, that your income has changed so drastically it sounds like, have you and your partner talked about is there a sum of money at which you would have to say no? Have you set a dollar amount if something were to happen?

Sypniewski: We never had that discussion. Luckily, if we were to come to a true emergency that was immediate and very expensive, we do have one credit card reserved for an ultimate emergency. But we’ve never tossed around a dollar amount. We usually take it on a case-by-case basis. I don’t our lack of money ever be the reason that we cannot provide care.

Vigeland: But Dr. Fuchino, the fact is that has to become a factor with certainly some of your patients. Where as much as you don’t want money to be a factor, it’s not like humans. You’re not going to just do whatever it takes.

Dr. Stacey Fuchino: I think what I kinda see as times have kinda changed is that you have to give people options that sound reasonable. Because if you don’t do that I think that pretty soon you’re gonna be looked at as someone that just wants to make a lot of money or “forget it, we don’t need you as a client.”

Vigeland: OK, I’m going to stop the interview for a moment. We’re going to put Ronan outside. Just a moment.

Vigeland: We have two dog owners here. I have dogs and cats, but I wonder in your practice if you find that people make this decision based on what kind of animal that they have?

Fuchino: No, I don’t think so, because I’ve done multiple surgeries on little rats.

Fuchino: Rats. And rabbits. And you know, they cost a couple hundred dollars to do this surgery, but it’s this whole part of their family. So I don’t think there’s a monetary value just because a bet only costs you a dollar doesn’t mean you necessarily don’t care for ’em.

Sypniewski: This is Sarah. We have five dogs, right? And when we decided to take on the fifth dog, our main conversation was “could we afford it if something went terribly wrong and all five of them had an emergency at the same time?” And that’s kind of our litmus test, right?

Vigeland: If that was your litmus test, then you must have done a calculation.

Sypniewski: It’s not a hard number.

Vigeland: Right. You can’t know the exact expense, but you had had to go through that conversation of what would we be willing and able to spend?

Sypniewski: Yeah, and that’s where that credit card comes in handy. We keep it so that if something were to hit the fan, we have a safety net. And that’s it.

Vigeland: Mia, can you talk about what it was like to have to make that decision, to go ahead and just let Maggie have whatever time she had left?

Dunn: When she reached age 14 and started really having problems, my husband and I really started talking about it — what would we do? How bad is this gonna get? What are we gonna do? Are we gonna do this? Are we going to spend more money? But it just happened so fast and even though we had prepared ourselves for it, wow. Wow. Maggie was my first dog, my first pet, and wow. Even today, I still think about that day and I had the power… I mean, I’m the one who made the decision to end her life and it’s just such an awesome responsibility and to this day, it still gives me the shivers sometimes. But ultimately, we know we did the right thing. We could’ve brought her home, we could’ve worked with her, taken her to physical therapy and things like that. but at that point, yes it was the money. But then also it was the quality of life.

Vigeland: You’re getting a lot of nods around the table here. We can all certainly relate to that. Dr. Fuchino, I guess maybe in closing, can you provide some words of wisdom, advice for people who are having to make that decision? Because it’s so hard, I think, for any of us to admit to ourselves that part of that does have to be a financial decision?

Fuchino: Yeah, and I think that there’s sometimes a fine line of whether to spend the money or whether you’re actually doing something that’s good for the pet itself. Some people keep going on and on. Yes, they have all this money to spend and they just keep going on, and what are they actually doing? They’re extending the life and days, years, months, but are they actually doin’ something that’s actually gonna be helpful for their pet? Is it increasing the quality of life? Maybe not. And a lot of times, I have to educate my clients and say, “You know what? We have to look at the quality of life.” And that’s why we’re given this power to be able to intervene in these situations, and that we sometimes just have to say, “That’s it.” I think there’s multiple options and there’s multiple ways that people can go about that.

Dunn and Sypniewski: Thank you.

Vigeland: All right, I suppose I can let Ronan in now. He’s sitting out here very patiently. Here we go!

Vigeland: And the sound begins again.