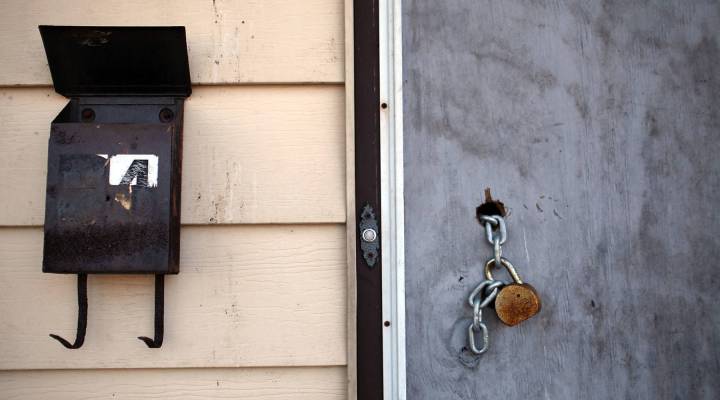 A padlock hangs from a door of a foreclosed home on Feb. 9, 2012 in Islip, N.Y. State and federal authorities have unveiled a $25 billion deal with big banks to address foreclosure abuses and to aid underwater homeowners. Spencer Platt/Getty Images

A padlock hangs from a door of a foreclosed home on Feb. 9, 2012 in Islip, N.Y. State and federal authorities have unveiled a $25 billion deal with big banks to address foreclosure abuses and to aid underwater homeowners. Spencer Platt/Getty Images

Kai Ryssdal: State attorneys general and federal regulators, along with the five biggest mortgage servicers — Bank of America and JP Morgan Chase among them — have come to a long-awaited $25 billion agreement. The banks, among other things, will be punished for wrongly foreclosing. Borrowers who owe more than their homes are worth will be helped.

And maybe — just maybe — the housing market itself will get a little something out of it too. Marketplace’s Stacey Vanek Smith gets us going.

Stacey Vanek Smith: Under the settlement, the five banks will pay up to $2,000 to people who lost their homes to foreclosure. For some homeowners who owe more than their houses are now worth, banks will have to cut the size of their loans.

Adam Levitin: That’s a drop in the bucket compared to the scope of the problem.

Georgetown Law professor Adam Levitin says U.S. homeowners owe a collective $700 billion more than their houses are worth — and the settlement would cut that by about $20 billion. Also, the settlement will help only about 1 out of every 10 underwater homeowners.

Levitin: You’re going to have a handful of homeowners who basically win the lottery and many others who are going to read find out that there’s nothing for them.

Phil Bergem is hoping to win the lottery. For the past two years, he’s lived 200 miles away from his wife because he found a job, but can’t sell his house in Andover, Minn., because his mortgage with Chase is $50,000 more than the home is worth. He says cutting his loan down to size would solve a big problem.

Phil Bergem: It would raise the possibility of being able to sell the house. That I could actually live with my wife again for a while.

Harvard housing economist Nicolas Retsinas says this settlement isn’t the ultimate solution to the housing problem, but it’s a significant step. That’s because the banks will have to cut the principle amount of the loan, not just the interest rate.

Nicolas Retsinas : There have been some efforts in the past to introduce this concept of principle reduction, but they’ve been pretty much catch as catch can. This would be the first significant effort to do so.

Government officials say they hope nine additional banks will sign on to the settlement.