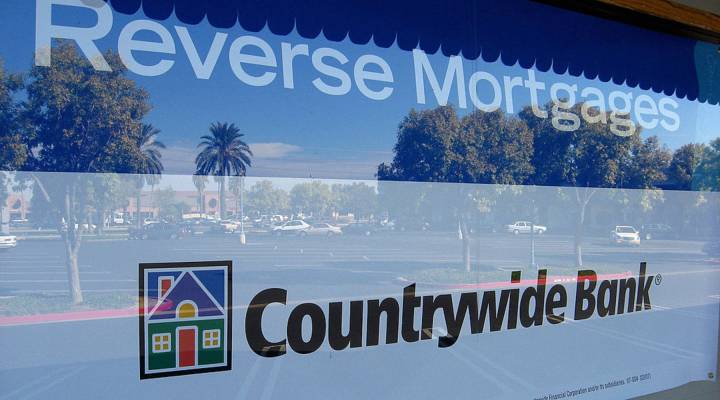 COPY
The reflection of blue skies and palm trees are seen in the window of a Countrywide banking and home loans location offering reverse mortgages in Sun City, Arizona. RICHARD A. BROOKS/AFP/Getty Images

The reflection of blue skies and palm trees are seen in the window of a Countrywide banking and home loans location offering reverse mortgages in Sun City, Arizona. RICHARD A. BROOKS/AFP/Getty Images
Listen Now

New rules for reverse mortgage loans are set to take place on Monday. The main headline: Senior homeowners won’t be able to borrow as much. Plus, they’ll have to pay more upfront. The reason is that one in five reverse mortgages taken out between 2009 and last year are expected to default. So, what’s the purpose of a reverse mortgage and why the new rules? We break down what you need to know.

What is a reverse mortgage?

It’s a way of creating retirement income for people 62 and older. It’s like a mortgage, but, well, in reverse. Instead of paying the bank each month, a reverse mortgage lender pays the borrower. It can be monthly income, a lump sum or a line of credit. It’s taking out a loan, using your home as security.

People seeking reverse mortgages must meet with a HUD-approved reverse mortgage counselor. And when the homeowner moves or dies, the loan, plus interest, has to be paid off.

Usually the home is sold to do this. If the home value is less than the balance owed, the heir or estate is on the hook to pay back the home’s value. Nothing more.

What are the new rules?

The new rules basically do two main things: Homeowners won’t be able to borrow as much and they’ll have to pay more in insurance on the loans.

The formula that determines how much one can borrow, based on their home value, will put new limits on the amount seniors can now borrow. New rates will be lower compared to prior levels.

The Federal Housing Administration insures all reverse mortgage loans. New borrowers will see higher upfront costs for insurance, but lower annual premiums than they would have paid in the past.

So, why the new rules?

Well, this program has been a money-suck for the Federal Housing Authority. Almost one in five, 18 percent, of reverse-mortgage loans taken out from 2009 to June 2016 are expected default or already have. That’s cost the federal housing authority $12 billion.

A HUD report issued last fall found that nearly 90,000 reverse mortgages held by seniors were at least 12 months behind in payment of taxes and insurance and were expected to end in “involuntary termination” in fiscal 2017. That’s more than double the number the year before.

With the new rules, seniors won’t be able to borrow as much, perhaps limiting how likely they are to default. And they’ll have to contribute more upfront to the fund that insures their loan, if a default occurs.

But, on the other hand, that could cut off funds to those that need it.

But I heard reverse mortgages can be risky. What’s going on with that?

The Consumer Financial Protection bureau found that reverse mortgages can be confusing for seniors. In a report, they found seniors entered loans confused over loan terms and requirements, and that some were given false information at loan origination. And if borrowers default on their loan, their home can be at stake.

“It’s a huge deal because you’re seeing people that are in their end of life now facing losing their home,” said Jennifer Levy, an attorney at JASA Legal Services for the Elderly. “They might be homeless, literally homeless, because they owe a quarter’s worth of property taxes.”

People need to pay property taxes under a reverse mortgage. If they don’t, the lender will pay, then ask for repayment. Plus interest. Levy said her clients are often given insufficient notice when they owe a lender additional money or the lender does not make the terms clear to borrowers.

“And basically gave them a misunderstanding that they can stay in their home for the rest of their lives without making any payments,” Levy said. “And they certainly didn’t explain that they could find themselves in foreclosure for something as little as forgetting to pay your property taxes.”

It’s been a major criticism of reverse mortgages. Instead of a tool to help seniors refinance, critics say, it’s been plagued by improper practices. Not all agree.

“If you have no mortgage and you don’t pay property taxes, what happens? You lose your home,” said Peter Bell, president and CEO of National Reverse Mortgage Lenders Association. “So that’s not really the reverse mortgage at blame. That’s the failure to meet a basic obligation of property ownership.”

Still, foreclosures on these mortgages have been on the rise. A 2011 mandate from HUD requires loan servicers to work out a repayment plan with seniors in tax and insurance default. And to foreclose if there is no way to help them.

“Most of the seniors that we see are living on a limited fixed income, which you know could consist of just Social Security or maybe a pension and some food stamp benefits,” Levy said. “A lot of them don’t qualify for a repayment plan.”

Mary Leo, a certified reverse mortgage counselor with The Housing Project at PathStone in Rochester, New York, works with people across the income spectrum. She said lower-income clients can rely on the reverse mortgage to pay off an existing mortgage or for essential household goods.

She said it’s rare for her clients to default, but knows it happens. She said changes to the program will help sustain its existence.

“If changes aren’t made to sustain that insurance pool, we’ll be without the program,” Leo said.

To hear Marketplace Weekend’s interviews with Peter Bell and Mary Leo, tune in using the player above.