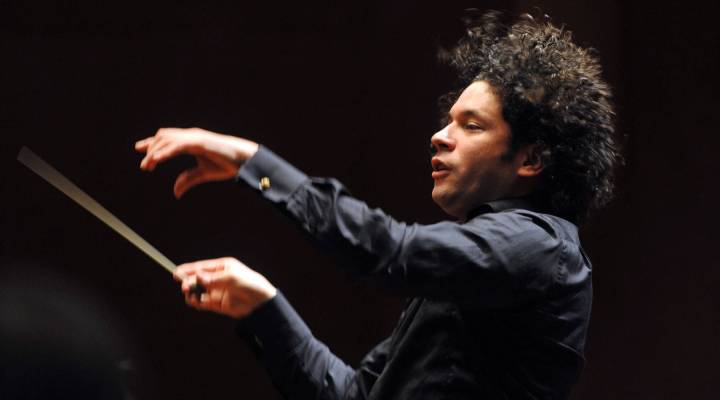 Gustavo Dudamel conducts during the presentation of the 'Concierto Sinfonico Binacional' at the Teatro Mayor Julio Mario Santo Domingo's theatre in Bogota, on Dec. 15, 2010. Dudamel will be appearing on "Sesame Street." GUILLERMO LEGARIA/AFP/Getty Images
Marketplace Music

Gustavo Dudamel conducts during the presentation of the 'Concierto Sinfonico Binacional' at the Teatro Mayor Julio Mario Santo Domingo's theatre in Bogota, on Dec. 15, 2010. Dudamel will be appearing on "Sesame Street." GUILLERMO LEGARIA/AFP/Getty Images

Stacey Vanek Smith: So what does this:

Have in common with this?

The answer: Gustavo Dudamel. He’s appearing on Sesame Street where he will conduct an octopus and sheep playing Beethoven’s “Ode to Joy.”

Aram Sinnreich is a professor of music and society at Rutgers. He says Dudamel’s flamboyant conducting style and friendly demeanor are perfect for getting younger kids interested in classical music at a time when professional orchestras across the countries are seeing ticket sales flag.

Aram Sinnreich: The long term prognosis is not good unless the younger generations become an active part of the classical music community. Dudamel is exactly the ambassador to communicate that excitement to young audiences.

Hoping to hook those young audiences, the L.A. Philharmonic developed an iPhone app called “Bravo Gustavo” — where you swing your iPhone like a baton and control the tempo of the music.