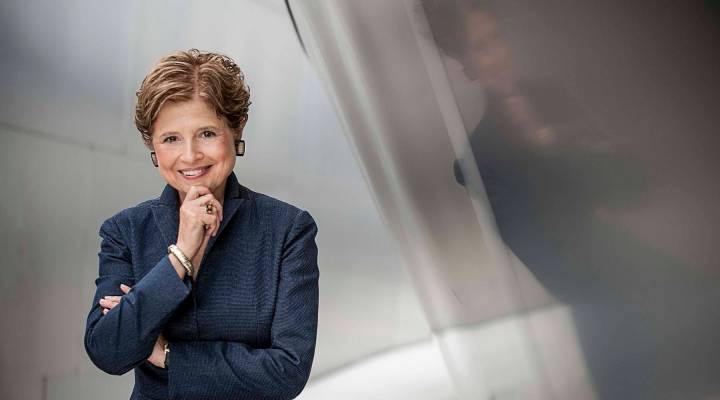 The Los Angeles Philharmonic is known for being one of the most forward-thinking and contemporary orchestras in the country. This year marks the orchestra’s 98th season.

Deborah Borda became CEO of the LA Phil in 2000. She is the woman behind many of the organization’s achievements over the last 16 years – including the construction of the Walt Disney Concert Hall and a re-vamp of the Hollywood Bowl, the orchestra’s two iconic venues.

In a time when classical music and orchestras are struggling to keep their heads above water, Borda has managed to expand marketing and increase fundraising for the LA Phil.

But, perhaps one of the most important moves Deborah made was hiring Venezuelan music director Gustavo Dudamel, one of the world’s most exciting conductors.

Dudamel and Borda have partnered up in creating diverse musical programs for all types of audiences, including a program targeting kids called Youth Orchestra Los Angeles (YOLA).

Conductor Gustavo Dudamel and the orchestra at the LA Philharmonic.

Borda on starting her music career as a violist, to running the LA Philharmonic:

I was always interested in other aspects of music. I was a composer, I composed, I conducted, I played and I was the person in my string quartet who always set-up the engagements, planned the programs, got the music stands there, negotiated the fee and collected the check. And in my mid-20s, it occurred to me that – as much as I am passionate about music – I felt really very drawn to the mechanics of it, the setting up of it, and also the creating of vision for what would be a vibrant musical life. So, I did what musicians now term ‘going to the dark side’ and I decided that I wanted to try this world of management.

On the LA Phil as a business:

The Los Angeles Philharmonic has the largest budget of any performing arts organization in the United States – [of] $125 million. Except for the metropolitan opera, which is of course bigger, but they have wigs, and make up, and elephants and sopranos on the stage. We also operate the Hollywood Bowl, which is a little place up the freeway with 18,000 seats. And – here is an interesting statistic – even if we sell out Walt Disney Concert Hall that covers only 45 percent of the costs of putting on a concert because we have enormous fixed costs in terms of paying the orchestra, marketing, operating the hall, etc. So, I spend a great deal of time fundraising, that’s true. I spend a lot of time also though with our board on matters of governance because the board helps us to raise the money, they are tremendously generous they give a lot of money as well, but they have to set the policies and agree on them. So, I spend quite a bit of time on that, but I have to say, I remain very close to the artistic product as well.

On her hopes for the LA Phil and its future:

I think it’s in our DNA, this sense of adventure and this sense of innovation. What I’m pleased about is I think we have designed a business plan and have enough resources so that I don’t have worries in that many years. The orchestra will be here.