Jeremy Hobson: And I’m happy to announce that if you see a countdown clock somewhere this week, it’s probably counting down to the end of 2011 — not to the moment at which the federal government shuts down, if Congress can’t agree to reach a deal to fund it.

Nice change, right? 2011 has been a year of tense standoffs in Washington that usually boiled down to two parties that just couldn’t see eye-to-eye on spending and taxes.

Our Washington Bureau Chief John Dimsdale has been covering it all for us this year and is here to give the highlights and the lowlights. Hi John.

Hobson: So it’s been a year of stalemate and brinksmanship in Washington leading right up to last week, when we had the last-second extension of the payroll tax cut. In all of your years covering Washington, have you ever seen anything like this?

Dimsdale: Never like this. Never with so many cliffhangers. Topping them all was the debt ceiling impasse, the August deadline over increasing the government’s authority to borrow. That came the closest to shutting down the government; they went right up to the day when the Treasury Department said it could no longer legally pay the government’s bills. Ultimately, it was resolved with the creation of that supercommittee — and we all know how that went.

Hobson: Indeed we do. And also of course, the nation’s credit rating was downgraded as a result of all the debt ceiling trouble. John, what were the legislative consequences of all of this back and forth that never seemed to lead anywhere in Washington?

Dimsdale: All sorts of proposals to use government policy to help the economy — we’re talking aid to states to keep teachers and police employed, or infrastructure projects to rebuild roads and schools, or safety net payments for long-term unemployed — gridlock just defeated all of them. Good or bad thing, depending on your view of the effectiveness of government policies. But there were continuing stalemates over a national energy strategy, or an immigration plan; judicial nominees were held up. Some of the openings on regulatory agencies, like that new Consumer Financial Protection Bureau or the National Labor Relations Board. There are all sorts of vacancies.

Hobson: Well just to give Washington a fair shake here, were there any things that did get through in 2011?

Dimsdale: Well, you know, that summer debt ceiling deal didn’t work with Plan A, the supercommitee, but Plan B required across the board cuts of more than $1 trillion — it’s not going to happen until 2013, of course, and there’s already talk that those cuts might be rescinded, but they’re in place right now and that’s a big step toward getting the government’s deficits under control. If you go to the White House website and you look up legislative accomplishments for 2011, it’s a pretty meager list. There’s free trade deals with three countries and patent reform to give inventors more incentives — but that’s about it.

Dimsdale: Absolutely. You know, we’re going to be in a middle of an election — a very polarizing election — which keeps most bills from passing Congress anyway. But it’s going to give voters a very clear choice between different visions of the government’s role in the economy.

Hobson: Well John, I want to ask you one more thing when it comes to the economy, which is that Washington’s economy is really pretty different than the economy in the rest of the country. Because the federal government is there, the jobless rate is lower than a lot of places, the housing market is a lot better than it is in a lot of places. Do you think that lawmakers in Washington understand the depths of this economic downturn?

Dimsdale: I think the lawmakers do, because they hear from their constituents loud and clear. But the lawmakers also hear a message from lobbyists — they’re a well-heeled group and their message frequently, it runs counter to what the voters are clamoring for. Lawmakers rely on those lobbyists for campaign cash, for information in their arguments. I think that’s where a lot of the disconnect lies.

Dimsdale: Thanks Jeremy, same to you. 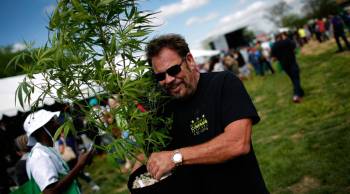