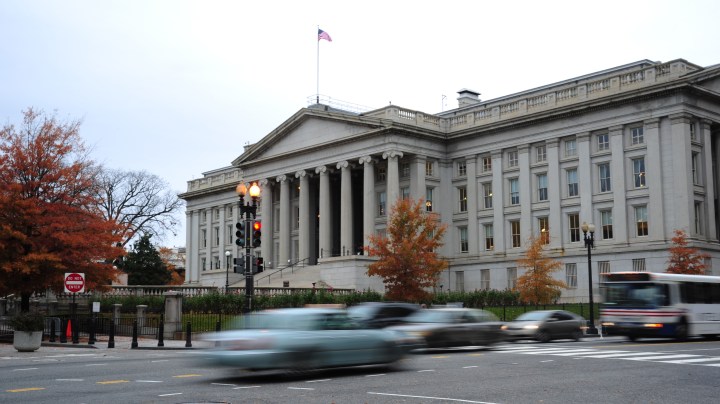 COPY
If an individual buys a property with only cash, the transaction may not raise any red flags. The Treasury Department is seeking to change that. Above: the U.S. Treasury building. Karen Bleier/AFP via Getty Images

If an individual buys a property with only cash, the transaction may not raise any red flags. The Treasury Department is seeking to change that. Above: the U.S. Treasury building. Karen Bleier/AFP via Getty Images
Listen Now

The Treasury Department is seeking public input on a plan to increase oversight of all-cash real estate transactions to try to crack down on money laundering.

As part of a bigger anti-corruption push by the Biden administration, the proposal would expand on temporary rules in place in a dozen metro areas.

So how might more transparency affect all-cash sales, which have grown during the pandemic?

When a shell company pays all cash for real estate worth more than $300,000, title companies must report the names of the people involved — but only in some markets, like Miami, New York and Seattle.

Right now, if a corrupt official buys a penthouse condo with stolen money, “he can often do so without any red flags being raised, especially if he’s used shell company and that purchase is done entirely with cash,” said Himamauli Das, acting director of the Treasury Department’s Financial Crimes Enforcement Network.

But will tougher national rules discourage all-cash deals? Daryl Fairweather is a chief economist at Redfin, which looked into it.

“They do look like they’ve increased a little bit faster in places that don’t have the rule in effect, but it’s not a big enough difference to really know if the rule is decreasing cash activity,” she said.

With so many people selling homes in expensive markets, like California, and buying in more affordable ones, like Texas, she expects the cash to keep flowing.