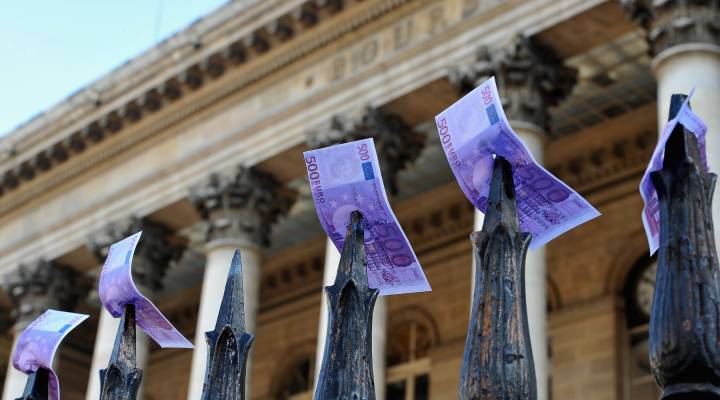 Why the world cares about European bond sales

Why the world cares about European bond sales

Fake 500 euro banknotes are placed by Pole Emploi Strikers on the gates outside the Paris Stock Exchange on Nov. 14, 2011 in Paris, France. Pascal Le Segretain/Getty Images

Kai Ryssdal: One reason European leaders are talking seriously about forming — to borrow a phrase — a more perfect union?

Money. How little some EU governments have of it, and how much they have to pay to borrow more.

Countries borrow all the time. Not usually newsworthy stuff This week, though, Italy, Belgium, Spain and France are going to try to sell more than $20 billion worth of bonds.

Marketplace’s Stacey Vanek Smith explains how the markets — not the politicians — are the ones driving this crisis.

Ragu Rajan is an economist with the University of Chicago’s Booth School of Business.

Ragu Rajan: Governments spend more than they raise in taxes, and the difference is made up by issuing bonds.

Bonds are an I.O.U. from a country. You loan the country money and it pays you back with interest. Rajan says since government bonds are usually seen as super safe, those interest rates tend to be low. Not the case for Italy right now.

Rajan: Markets have started questioning whether they have the ability to repay their debt.

It’s a lot like what happens when someone who had a good credit starts paying bills late. Neil Dutta is an economist at Bank of America.

Neil Dutta: Well, how’s a lender going to respond to that? A credit card company for example would probably cut your credit line, they might not even extend you credit.

To get people to lend it money now, Italy has to pay higher interest rates. Today, Italy sold bonds at more than 7 percent interest. That’s more than three times what the U.S. pays for similar bonds. Italy’s interest costs are now so big, they’re a tenth of Italy’s economic output.

Rajan: That’s huge. That’s the kind of payment we make to the entire Social Security, for example.

Rajan says Italy has to step up with a financial plan that will convince investors it’s turning its economy around. Second of all, the European Central Bank and neighboring countries have to back Italy, says economist Neil Dutta.

Dutta: The ECB, that’s ultimately where they have to get the money.

Kind of like when you get your parents to guarantee a loan. Dutta thinks eventually the ECB will start buying Italy’s bonds.

Dutta: It’s incumbent upon them not to let Italy spiral out of control. Because, as has been said so truthfully, Italy’s not only too big to fail, it’s too big to save.

Dutta says the future of the eurozone hinges on rallying around Italy.