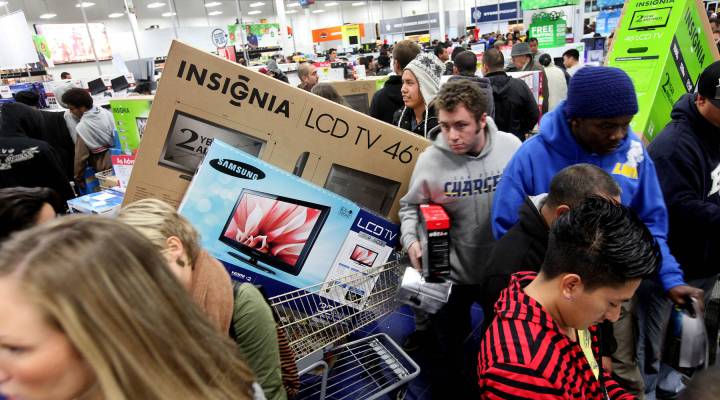 The national retail federation says sales over the last 4 days jumped 16 percent from last year. Consumers spent an average of 398 dollars on Black Friday– and Black Thursday, and all Black Saturday and Sunday. And about 40 percent of that shopping was done online.

226 million people shopped during the Thanksgiving holiday weekend. And Black Friday sales topped $11.4 billion, up 7 percent over last year according to ShopperTrak.

So far, police in Los Angeles have arrested 3 people as part of the Occupy LA movement. The city wants them to leave their staging grounds downtown so they can clean it up.

If you’ve been having Thanksgiving leftovers for breakfast, lunch and dinner this week. And think it’s weird to eat turkey and stuffing at 9 am. Apparently it’s not. Listen to some of these findings from the nation’s fast food chains. Dunkin Donuts says it sells tons of chicken salad sandwiches at breakfast time. And Kellogg’s says about a third of all cereal is eaten for meals other than breakfast.

It’s not easy these days finding coworkers who are respectful at the office. California staffing company Robert Half International’s latest survey of hundreds of U-S office workers lists some of the most egregious breaches of etiquette at work. Like throwing papers in a furious fit over a work project. Or taking a picture of a coworker sleeping on the job and sending it to the boss. Ouch. And the etiquette breach I have the biggest beef with… Stealing someone’s lunch out of the company fridge.

And in today’s Mid-day Extra, we look at the future of Cyber Monday.