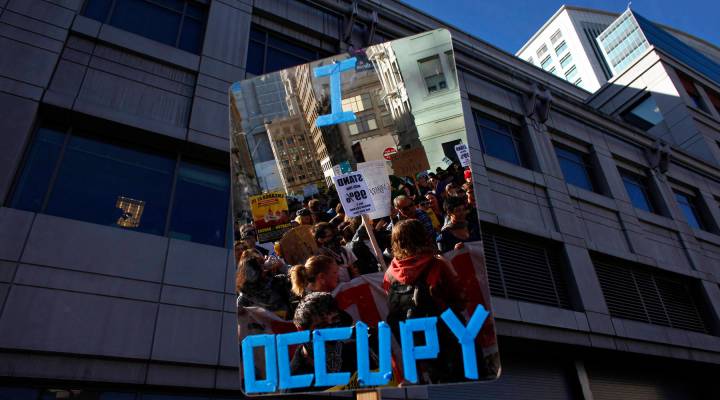 Demonstrators with the Occupy movement are seen reflected in a sign November 2, 2011 in Oakland, Calif. Eric Thayer/Getty Images

Kai Ryssdal: Maybe our advice to the Occupy movement yesterday was superfluous, because clearly they’ve got something going for themselves — branding and marketing problems aside.

Because it seems everywhere you turn, Occupy slogans are worming their way into conversations, jokes and pop culture. We asked Marketplace’s Stacey Vanek Smith to take a tour of our preoccupation with the occupation.

Protesters: Whose street? Our street!

To just about everywhere else.

Jen Drexler: We love a good underdog, especially at a time when there’s so much discontent. Let’s pick up this sort of folk hero who is willing to sleep in the rain in a park and march through the streets.

The movement itself has taken in more than half a million dollars. Three groups have fought over the Occupy Wall Street trademark. And entrepreneurs are seeing opportunity.

Regan Bozman: People had been using Occupy in common conversation: let’s ‘Occupy this bar tonight.’ And we were talking and we came up with this idea of the T-shirts.

Regan Bozman is a student at Harvard. He and fellow junior Jacob Roberts have a business selling Harvard products. The two caused a big splash with an Occupy-themed shirt that they made for the big rival game with Yale.

Bozman: It’s a mesh jersey, and on the front it says #occupyyale. And on the back it says: We are the 6 percent.

That would be Harvard’s admissions rate. The shirts sold out.

Marketing expert Jen Drexler says people like adopting the language of the Occupy movement, because it makes them feel like they’re a part of it.

Drexler: It sort of says, I disagree, we’re not really sure what you disagree about. But by even saying Occupy, it’s like, I’m disagreeing with something that’s going in the social universe and it’s, even in its own little way, taking a pretty big stand.

Trickling down even to our youngest citizens. Dan Mucha’s 5- and 6-year-old girls started asking about the Occupy Wall Street movement and took some direct action of their own.

Dan Mucha: They were motivated to take an umbrella as their tent, some pillows from the couch and ultimately the dog to camp out in the garage. I don’t feel like they think we’re the oppressors — or at least not yet.

Just wait until they learn percentages in math class.