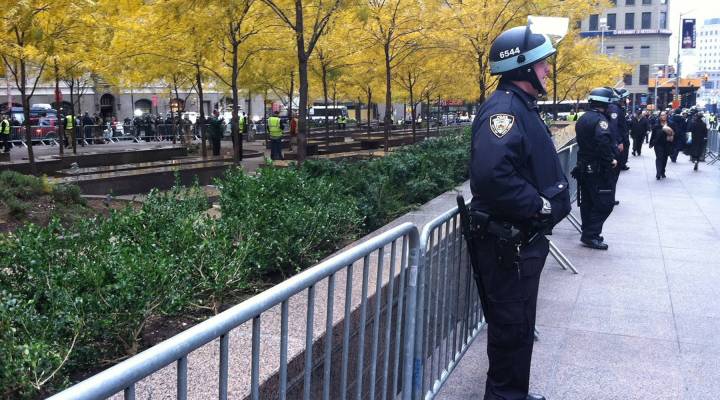 Jeremy Hobson: The real action this morning is not at the New York Stock Exchange, it’s just a few blocks away at Zuccotti Park — that’s the site of the original Occupy Wall Street protest. Demonstrators were cleared from the park in a surprise raid by police at 1 a.m. New York Time. And in the last couple of hours, a judge has told the city to let the protesters back in.

Marketplace’s Stacey Vanek Smith has been following developments from Lower Manhattan all morning, and she joins us now. Good morning.

Hobson: So you’re at Foley Square, which is a place that the protesters that were in Zuccotti Park have moved to — what’s the latest from there?

Smith: Zuccotti Park is completely empty now — it’s been barricaded off, the police are everywhere in riot gear. A few protesters are still standing outside of the barricades; many of them have moved here.

But I spoke with one of the protesters, Aaron Harnley. He’s been at Zuccotti Park since 2 a.m., and he said that the fact that Zuccotti Park was cleared probably won’t actually discourage the movement, but have the opposite effect.

Aaron Harnley: This dramatic, midnight — probably illegal — clearing of the park succeeded in giving the movement a lot of —

Harnley: — we’ll let the socialists go by. What it did was it succeeded in giving the movement a lot of attention and some drama. And so I think that will not succeed in ending the movement at all.

Hobson: So, the protesters were kicked out, and there’s this judge that says, no they have to be allowed back in. Who wins in this situation — did the protesters win or did the city win?

Smith: Well, the protesters are saying that they are winning — that this is reinvigorating the movement. Certainly, there has been a loss — a lot of the tents were seized and slashed up by police, reportedly.

And a lot of that property — the medical tent, the cook tent, the library — sort of all of the trappings of the tent city that had sprung up in Zuccotti Park had been destroyed, so certainly that was a loss. But the protesters have been insisting all morning that this will just reinvigorate the movement and give it new life.