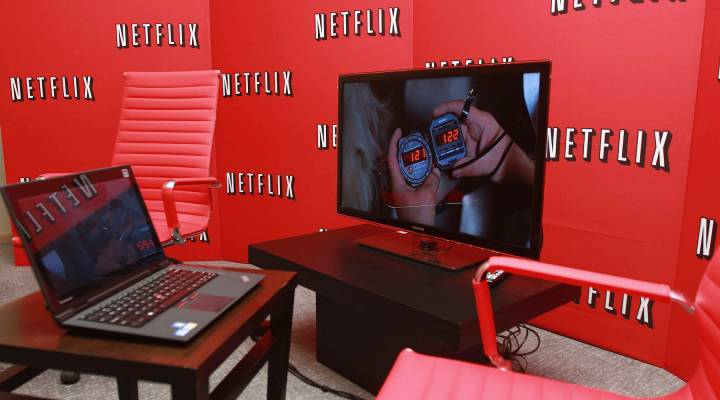 COPY
General view during a press conference with Reed Hastings, CEO of Netflix, to announce the Netflix service in Mexico at the St. Regis Hotel on Sept. 12, 2011 in Mexico City, Mexico. Hector Vivas/Latin Content/Getty Images

General view during a press conference with Reed Hastings, CEO of Netflix, to announce the Netflix service in Mexico at the St. Regis Hotel on Sept. 12, 2011 in Mexico City, Mexico. Hector Vivas/Latin Content/Getty Images
Listen Now

Steve Chiotakis: Later today, movie and TV rental giant Netflix reports earnings. The company’s expected to post a profit, even though it’s had a rocky few months as it tries to shift its business to streaming.

Stacey Vanek Smith: Since announcing a fee hike in July, Netflix has seen its share price drop more than 60 percent, and it’s shaved a million people off of its subscriber projections. Media industry analyst Porter Bibb says the company does have the right idea: About 140 million people watch TV on their computers.

Porter Bibb: The streaming model that Netflix created, that’s going to be the way that we all consume our movies and television going forward.

Bibb: The content providers, they’re very likely to set up their own businesses rather than give away the store to third party streamers.

Bibb says Netflix got to the business early, but it’s only a matter of time until content creators figure out a solid online business model to oust the middleman.