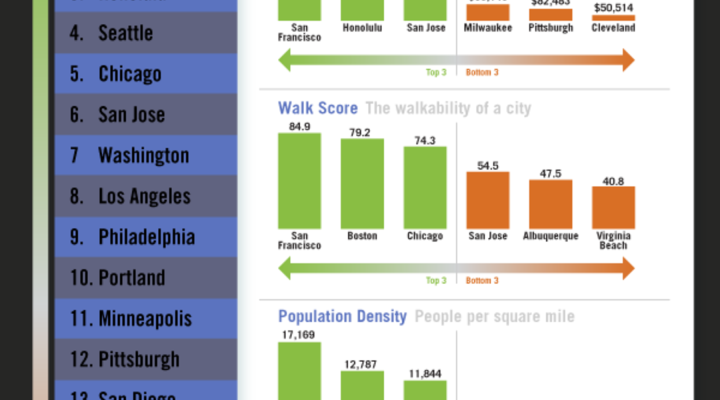 Zillow has released its list of the top 20 trick-or-treat destinations in the US.

Top of the charts: San Francisco. The city scored highest on walkability (vital if you’re staggering dressed in a suffocating mummy suit), population density (which you need if you’re to net a half-decent haul of goodies), and median home value (obviously you want lots of wealthy folks who’ll likely hand out more candy).

Strangely, however, San Fran managed to win out despite being the third most crime-ridden city on the list!

The news that San Francisco Halloween revelers could score a serious amount of candy one minute — and then find themselves being relieved of it the next — reminded us that the city is home to Bank of America, now famous for raiding is customer accounts of all sorts of random fees and taxes. But the thought of Halloween being just around the corner — and the promise of all those toothsome treats — is giving us an anticipatory sugar rush, and strengthening the Marketplace Daily Pulse today.

The City by the Bay was second in the top 20 last year, runner up to Seattle, which fell from first to fourth place this year. The biggest gainer on the list was Honolulu, which came in third this year, despite not even making last year’s list. The biggest loser was Sacramento, which placed sixth last year, but didn’t even make this year’s list.

Zillow’s list actually provides some interesting insights into the economic states of certain regions — confirming some preconceptions, but also providing some surprises. The Sun Belt, which was heavily affected by the housing crisis and has seen real estate prices plummet, was creamed in this year’s ranking: Las Vegas and Phoenix both fell off the list, and Albuquerque dropped nine slots to 20th place. Texas was excised completely, as both Austin and San Antonio failed to make the grade. Those cities were replaced by a strong showing in the Northeast, with Washington D.C., Boston and Philly advancing, and Baltimore and Pittsburgh joining the list.