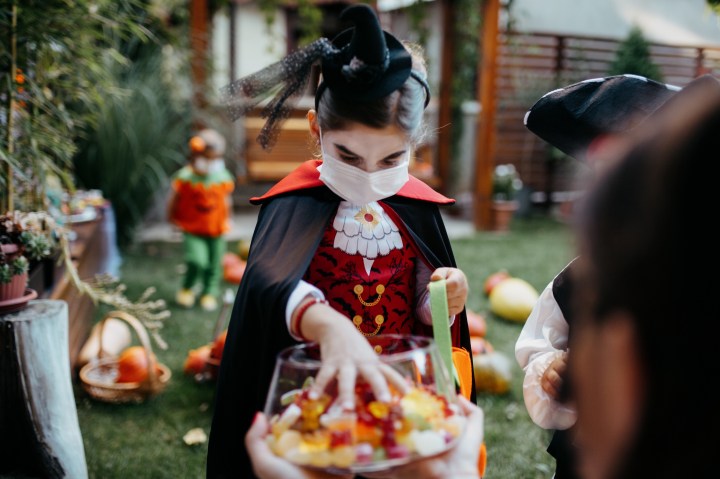 Many families are still celebrating Halloween amid the COVID-19 crisis. Anchiy/Getty Images
COVID-19

Many families are still celebrating Halloween amid the COVID-19 crisis. Anchiy/Getty Images

Armed with pipes, foam and paint, Michigan resident Breanne Cremean spent several hours constructing a device that will still allow her to give out candy to trick or treaters this year: a “Beetlejuice” candy chute.

She was inspired to make it after seeing someone online make their own version, and thought it would be a cute way of passing out candy while keeping everybody 6 feet apart.

“The hardest part was figuring out the right angle to put it at so that the candy doesn’t get stuck,” Cremean said, laughing. “My husband and I did a lot of testing.”

Innovations like candy chutes have grown popular because of the pandemic, creating a market for businesses like the appropriately named Candy Chute to capitalize on it. “Candy Chute was invented to provide a safe way to deliver candy to a trick-or-treater this Halloween,” the company wrote on its website.

The COVID-19 crisis has forced many to get creative this Halloween, with people like Cremean putting measures in place that adhere to social distancing guidelines while still getting to celebrate the holiday.

Even amid the ongoing pandemic, more than 148 million U.S. adults plan to participate in Halloween-related activities, according to a survey from the National Retail Federation. Safe-at-home activities ranked the highest among those who plan to celebrate, with 53% planning to decorate their homes.

Halloween is usually a big holiday in Cremean’s household, and they’re keeping it that way. Her family, sticking with the “Beetlejuice” theme, plans to dress up as characters from the movie.

“We didn’t want to give it up if we could figure out a way to keep it safe,” she said.

The NRF says consumer spending is expected to reach $8.05 billion this year, which is a drop from the $8.78 billion spent in 2019.

However, those who plan to celebrate are spending $92.12 on average, compared to $86.27 last year. And when it comes to candy sales, Halloween chocolate and candy sales were up 8.6% as of Oct. 4 compared to last year, according to sales data from the market research firm IRI.

Cristina Rican, a 29-year-old resident from Seattle, Washington, has spent about $100 in candy, gift bags and Halloween decorations this year, and plans to give away prepackaged bags of candy that have full-sized bars — which she hadn’t in the past.

She and her husband have almost doubled the amount they’ve spent in past years.

“We figured if kids were going to be venturing out, we wanted to make our house a worthwhile stop,” Rican said. “It all harkens back to creating that sense of normalcy. Kids especially have had to give up so much of what they know due to COVID, and if they can get this one night to be kids again and have fun, I think any effort we can put in is worth it.”

Rican and her husband will set up a sign telling trick-or-treaters that they can take premade bags, while they sit away at a distance.

The crisis has also upended the holiday for Jennifer Roney, a 49-year-old resident from Mokena, Illinois.

“It’s the first Halloween in a long time that’s been on a Saturday. We were all pretty excited about it in our neighborhood,” Roney said. “Now that’s different, and there are not going to be any parties.”

But in the event that trick-or-treaters stop by, her household is setting up a 10-foot table with a candy spread where they can pick out the items themselves while she watches from a distance. She’s still also decorated her home, putting up pumpkins, skeletons and lights.

Jessyka Gartz, a 36-year-old resident from Rochester, New York, has a 10-year-old daughter who she usually takes out to trick-or-treating for hours. But this year, she’s going to have a small celebration with people whom her family interacts with regularly.

She has a projector that she’s going to install outside, where they’ll don costumes and watch movies.

Gartz also bought candy, and is thinking of building a candy chute so that she can dole it out to any trick-or-treaters that come by.

“It’s always been my favorite holiday. Halloween is the one thing that I won’t let get ripped away from me,” Gartz said, laughing.

In total, she said she spent maybe under $100 this year.

“I think this is probably going to be one of the easier holidays to maintain as a socially distant thing,” Gartz said. “Halloween is so much more than going to strangers’ houses and getting free candy.”