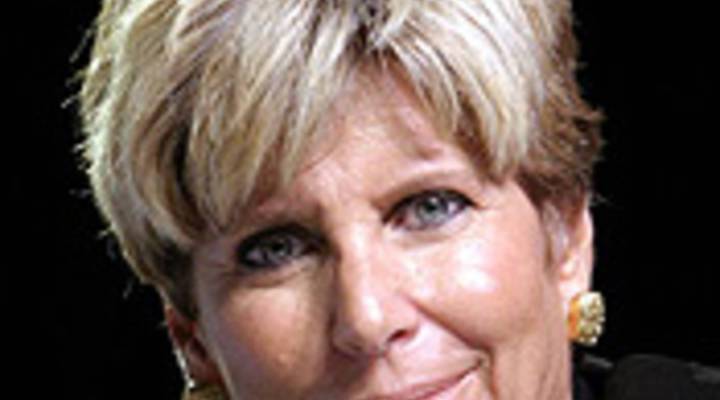 Tess Vigeland: Listen verrrry closely and you might recognize this voice.

Woman: Denied, are you nuts, you can not afford it. Carry money in a paper bag, I have to tell you, you are denied.

You may think it’s Kristen Wiig from “Saturday Night Live,” but no, it’s the real deal. The diva of dollars herself, Suze Orman. She’s just written another book called “The New American Dream.” And she joins us now. Welcome to the show.

Suze Orman: I am happy to be here.

Orman: It looks like happiness, hope. It looks like you have a life, where you communicate with one another, because everything you’re communicating with is the truth. You know, the old American Dream was based on bigger, better, more. More house, more car, toys, all of these things. And that would’ve been an OK dream if we had the money to have paid of those things, Tess. So it’s actually good that the old American Dream is dead, because it was a dream that was based on financial lies. The new American Dream, there is no debt, you live below your means, within your needs. You get pleasure out of savings, as much as you do in spending.

Vigeland: It sounds a lot like maybe we’re just going back to a more realistic American Dream of 20, 30 years ago.

Orman: I wish it could be that easy. You know, way back then, when you retired, you had a pension. Today, health insurance is going to be tremendously expensive; Social Security is being postponed and postponed, in terms of when you can actually collect it. You’re not going to leave a job with a pension, because they don’t even offer pension plans anymore.

The new American Dream actually is knowing how long you need to work in order to pay your bills. For most of you, it really will be till you’re 67 years of age.

Vigeland: What do you think of that development in our financial lives that so much of it is left to us now. You mentioned we don’t have a pension system anymore, we have to now manage our own 401(k) retirement plans. And we have to understand investments to be able to do that. Is this a good development or a bad one?

Orman: Well, we get into trouble, because we think everything’s going to be OK, somebody’s going to take care of us. We now live in a world where everyone us has to be responsible for the money that we’re making.

Vigeland: Even though you’re saying we’re living in a new reality, you take to task this concept of a new frugality coming out of the Great Recession. What’s your issue with that phrase?

Orman: Well, it’s that we’re not really having to be frugal. We should just really live our lives where we take as much pleasure in saving as we do in spending. You should be loving the fact that you’re in control of your money versus your money is in control of you. The new American Dream is a dream where you stand in your truth, where if you have to say to your kids “I love you so much, but I don’t have any money in retirement, I don’t have an emergency fund. I can’t even barely pay my mortgage. I can’t afford to pay for you to go to school.” And the kids are starting to understand that they can deal with this, because they know what to do then. If they’re going to go to school, they need to take out a student loan, they need to know how much of a student loan they can take out. It’s not about just being frugal; it’s about being honest.

Vigeland: But when you talk about taking pleasure in saving, that really is a change of mindset. And behavioral economists have done studies that show literally pieces of our brain light up when we’re spending, when we think about spending.

Vigeland: So there’s something in us that’s wired to be much more excited about spending than we are about saving. How do we change that?

Orman: By simply changing. You know, I’ve always said, “If you want to change, just change.” Recently, I just did a piece…

Vigeland: You make it sound so easy!

Orman: Well, you know what, I have to tell you, it is. I love saving money more than spending any day. I rather eat at home than eat out at a restaurant, because it makes absolutely no sense to spend that kind of money. Now, I have a lot of money. I’m a very wealthy woman, and I work for every penny of that. So I know what it took. I make choices where my money goes further. So I don’t spend money just because I have the money to spend. Start having pleasure in saving money, equal to that to spending money. Can you do it? You absolutely can.

Vigeland: There was a lot of talk that more and more people were going to do that coming out of the Great Recession. But of course, we’re already getting reports of increased credit card use, things like subprime lending for cars. Do you really think that we as a society can change our habits permanently to become better savers than we are spenders?

Orman: I do. I do with every ounce of my being, if we start talking about this conversation. Seven years ago, I met somebody from Washington D.C. outside of the NBC Experience store with him mama here in New York City, where I’m coming to you from. And I started talking to this little boy about saving and putting his money actually in a savings account and what would happen. And they actually just showed this piece, the other day, on “Nightline.” They then brought him back. He’s now 17 years of age. His mother, who is a single mother did exactly what I said, and they now have enough money for Diante, is his name, to go to be the first one in the family ever to go to college. He will tell you he gets more pleasure out of savings than spending. But how did that happen? We started him when we were seven. So yeah, I never think that it is too late to learn this message. But I will say this: The sooner you begin it, the better off you will be.

Vigeland: Suze Orman, thank you so much for being with us today.

Orman: Thanks for having me Tess.

Vigeland: You can find an excerpt from Suze’s book at the Big Book. We had quite an extensive conversation with Ms. Orman and we’ll bring you more of it in a few weeks.