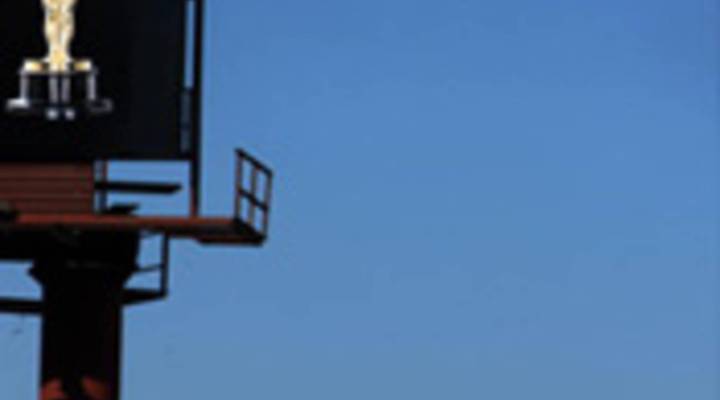 All Oscars all the time

COPY
An advertisement for the Oscars is displayed before the famous Hollywood sign 23 January 2007 in Hollywood, California. GABRIEL BOUYS/AFP/Getty Images

All Oscars all the time

An advertisement for the Oscars is displayed before the famous Hollywood sign 23 January 2007 in Hollywood, California. GABRIEL BOUYS/AFP/Getty Images
Listen Now

Kai Ryssdal: More tablets next year is not soon enough for the producers of this year’s Oscars. They’re all about iPads and smartphones and live streaming for the broadcast Sunday night. Marketplace’s Stacey Vanek Smith has more on Oscar 2.0.

Mark Stagi is the co-founder of AppEzzy, creator of the Oscar Awards Hero iPhone app.

Mark Stagi: People can create an Oscar pool with their friends and kind of see who can get the best number of picks right.

So far 10,000 people have bought the app. That kind of social media is creating more interest in events like the Oscars for viewers and advertisers, says Brad Adgate with Horizon Media.

Brad Adgate: The amazing thing is it’s really helping traditional media like television. It’s really given it a spike.

In 2008, Oscar viewership hit an all-time low. But with the help of Twitter, Facebook and apps, viewership has climbed 30 percent since then. The Grammy’s just saw its highest ratings in a decade, and Super Bowl viewership set an all-time record.

Susan Orlean: It’s like a 24-hour-a-day run-up to the Oscars. It promises all those extra camera angles on the red carpet that you might miss.

Orlean: Something like the State of the Union or the Oscars, it’s an event and if you aren’t actually sitting with a large group of people but you can kind of interact online with other people watching — that’s the whole point, it’s a spectator sport.

The market is growing. At the end of this year, it’s estimated more than half of all Americans will have a smartphone. And the tablet wars are just beginning.

Ryssdal: We’ve got Oscar by the numbers, Academy Award facts and figures.