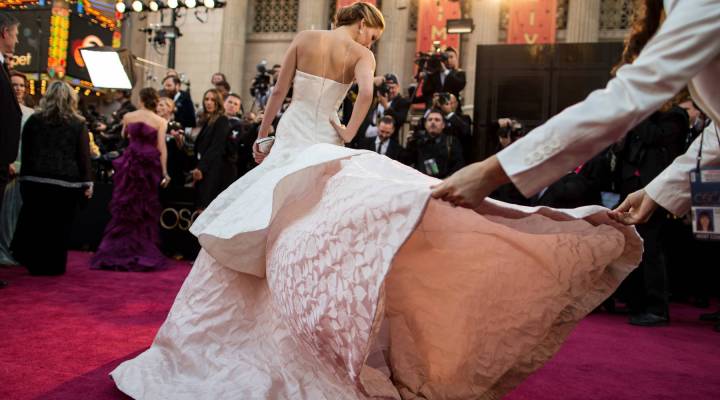 COPY
Actress Jennifer Lawrence gets styled on the red carpet at the 2013 Oscars. Celebrities are increasingly thanking their beauty teams via social media, which can be an added bonus for employees. Christopher Polk/Getty Images

Actress Jennifer Lawrence gets styled on the red carpet at the 2013 Oscars. Celebrities are increasingly thanking their beauty teams via social media, which can be an added bonus for employees. Christopher Polk/Getty Images
Listen Now

When Amy Schumer won an Emmy earlier this year, she thanked the usual suspects: her network, Comedy Central, and, as she put it, “all the suits who represent me.”

But Schumer didn’t stop there. She also gave a big thank you to, “the girl who gave me this smoky eye. I really love it.”

It was a classic Schumer laugh line. And as far as shout outs for eye shadow from the stage of an awards show…likely a first.

But over on Instagram, awards season is one long parade of thank yous to (hashtag) dream teams of hair stylists, personal trainers, make-up artists and the rest of the modern celebrity entourage. And this weekend’s Oscar extravaganza will be no exception.

“I think it’s natural when these people are just a big part of the celebrities’ lives, for them to infiltrate their Instagram feeds,” said Amy Odell, author of “Tales from the Back Row: An Outsider’s View from Inside the Fashion Industry”.

Lisa Jammal heads the social media firm, Social Intelligence Agency. She says there’s something else at work, too. “It’s really them being a good boss.” Jammal says a star’s permanent team gets paid for the work they do, and the Instagram call outs are legit pats on the back. “You want to work for a boss that is giving you a compliment,” she said.

On the flip side, some service providers will gladly give away their services for free to celebrities in return for a social media call out. “Instagram has become a career maker for the manicurists, spray tanners, shrinks, facialists and botox injectors in Hollywood,” said Jo Piazza,  author of “Celebrity, Inc.: How Famous People Make Money.”

“Those people have built their brands off of celebrity thank-yous on social media,” she said.

Piazza says a single shout out on Instagram from the right celeb can be worth tens of thousands of dollars in business.