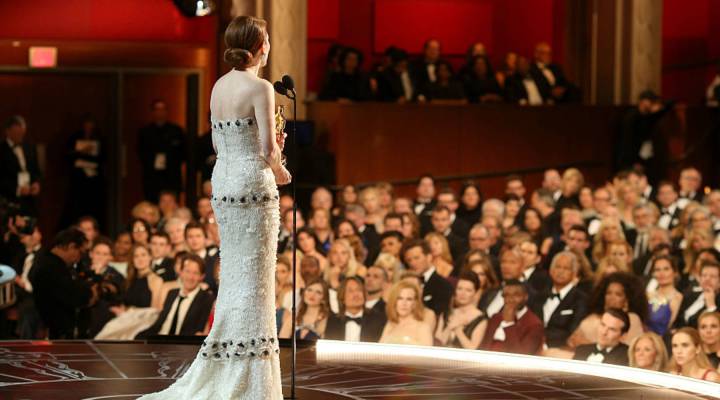 COPY
Winner Julianne Moore gives her acceptance speech as she holds her statuette for Actress in a Leading Role during the 87th Annual Academy Awards at Dolby Theatre on February 22, 2015 in Hollywood, California.  Christopher Polk/Getty Images

Winner Julianne Moore gives her acceptance speech as she holds her statuette for Actress in a Leading Role during the 87th Annual Academy Awards at Dolby Theatre on February 22, 2015 in Hollywood, California.  Christopher Polk/Getty Images
Listen Now

There was a time when Oscar speeches were simpler. Consider Broderick Crawford’s list of thank-yous, when he picked up the Best Actor award for “All the King’s Men” in 1950. “I would like to thank all of you, and especially thank God,” he said.

When Hattie McDaniel won for Best Supporting Actress for her role as Mammy in “Gone with the Wind,” she said “This is one of the happiest moments of my life, and I want to thank each one of you who had a part in selecting me for one of the awards for your kindness. It has made me feel very, very humble.”

Now consider the modern-day celebrity, like Patricia Arquette, who accepted the Best Supporting Actress Oscar last year for “Boyhood.” Arquette started by thanking the Academy and her fellow nominees and moved on to her team of agents and managers and through many more thank-yous that ultimately landed her at GiveLove.org, which she thanked for helping her “bring sanitation to the developing world.”

One reason the thank you lists are longer today, is because the Academy allocates more time. During the 1949 awards, winners had 15 seconds for their acceptance speeches. This Sunday, they’ll have 45 seconds.

It’s also become easier for stars to fill that time with long lists of thank yous, because the celebrity “team” has exploded. Once a small group of agents, managers and publicists, today’s team can easily fill a large conference room.

“Celebrities have very much become brands, they’ve become bonafide international brands, and as they’ve grown, their teams have become much larger,” said Jeetendr Sehdev, who studies celebrity branding and marketing at the University of Southern California.

“I think it’s because celebrities have gotten a lot needier,” said, adding that today’s stars require more hand holding because many of them are famous for being famous, not for being talented. “To remain in the public eye, it does take this huge celebrity industrial complex to keep them interesting and allow them to keep making money.”

And a nice chunk of that money goes right back into funding the celebrity industrial complex. Percentages for managers, agents, lawyers. Monthly checks to make-up artists, masseuses, personal trainers and social media managers.

“That sort of team is only going to keep growing as the stakes become higher and celebrity and the landscape becomes more competitive,” said USC’s Sehdev.

And as the team grows so does the snooze factor of award-show thank-yous.

Which is one reason the Academy of Motion Picture Arts and Sciences is introducing a thank-you scroll to this year’s broadcasts. Winners can chose those they want to thank before the show, and their names will run across the bottom of the screen during an acceptance speech.

The hope is the scroll will give winners like Patricia Arquette more time to spend on the interesting parts of their speeches, like Arquette’s call last year for wage equality for women.

And that they won’t be drummed off the stage by the music, while they’re still in the midst of a never ending list of names.