What’s next for Watson?

What’s next for Watson?

Kai Ryssdal: There are two ways to look at the win by that computer in “Jeopardy!” last night: One is that it was an awfully expensive way and a whole lot of trouble to go to to win a lousy game show — four years and millions of dollars. The other way to think of it is that we were seeing a slice of the future. A technological breakthrough of vital importance.

Either way, companies think Watson has at least some of the answers. Marketplace’s Janet Babin reports.

Janet Babin: Watson could easily be mistaken for a human “Jeopardy!” contestant.

But a human celebrity? He’s got no feel for that.

IBM’s lead researcher on Watson, David Ferrucci, agreed to stand in during Watson’s 15 minutes of fame. I asked him: Which response hurt most?

David Ferrucci: Of course, seeing the answer for the Toronto-Chicago one was painful.

Watson answered “What is Toronto?” to a query in the U.S. cities category. Even “Jeopardy!” host Alex Trebek had fun with that one.

Alex Trebek: I learned Toronto is now a U.S. city.

Ray Kurzweil: It made some dumb mistakes that humans wouldn’t make, but it made up for that, and was able to win the contest because of its tremendous scale.

Watson’s win has netted IBM a contract with speech recognition firm Nuance Communications and Columbia University’s medical school. There may be infinite applications for Watson.

Debra Kaye: What makes business stand still, is the inability to make a decision. And what’s so amazing about Watson, is that it may not have the right answer, but it gives you the probabilities for the top three answers.

Kaye says companies in just about every field can take it from there. 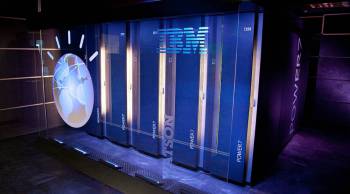