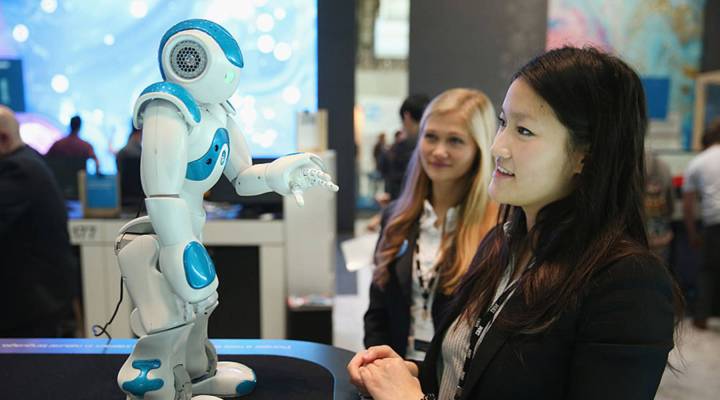 IBM reported earnings Wednesday. Most revenue came from cloud services, security and data analytics. Less impressive was its Cognitive Solutions department, which includes artificial intelligence, mostly under the brand of the “Jeopardy”-winning supercomputer Watson. Brandon Purcell, an analyst with Forrester, said IBM is selling artificial intelligence as a service through what’s called an API — application programming interface — which lets companies license the power of Watson and build their own tools on top of it, like digital assistants or in-house analysis tools. But there are a lot of other tech companies, like Google and Amazon, working on similar AI products. Marketplace Tech host Molly Wood asked Purcell if AI is a good business bet for IBM. The following is an edited transcript of their conversation.

Brandon Purcell: At the core of Watson is these dozen or so APIs that do different types of AI. So, like computer vision or natural language understanding, which you would use to build a chat bot. Those are strong capabilities, but still require very technical resources on the part of the enterprise to use them together as components for an artificially intelligent solution. One of the issues with Watson is that IBM has taken that term, Watson, and labeled all of their products Watson-this and Watson-that, and to a certain degree, that’s diluted the essence of what Watson is.

Molly Wood: So I feel like we’re saying if the analogy is the gold rush, there’s AI to make your product better (which if you’re Google or Facebook, you’re going to use it to make your product better) and that’s like the gold. And then there’s AI that you could sell to companies to make their products better, like shovels. Is that a fair characterization? And then which side is the better business?

Purcell: Yeah, that’s definitely a fair assessment and gold rush is a good term. The real value in AI is in the data that you use to train it: the size of that data, and also how relevant that data is to the use case that you’re interested in. Conversational interfaces, in a way, they’re still in their infancy, but I can easily see a world where Google, Amazon, IBM have all nailed conversation for computers. And what differentiates for the brands using this is actually the intelligence that goes into what the interfaces are saying. So they understand English, but are they actually saying the right thing to customers? Are they actually understanding the context of that customer experience to deliver the right response? That’s where the big bucks are going to be.

Wood: So far, Google and Facebook and Amazon, that we know of, are not trying to license their artificial intelligence technology, or are they? In the same way that IBM is?

Purcell: Parts of it they are, certainly. Google has built up a very robust computer vision platform, and they’ve actually taken great pains to make it accessible.

Wood: Because it sounds to me like, Watson may be pretty neat, but I’d want to go with the company that is cataloging all the search queries in most of the world.

Purcell: Yeah, that is something where Google certainly has a leg up. And Amazon as well. Though the one company we haven’t mentioned is Apple. You’d think that they would be further along with this because they also have a lot of data, but they have traditionally lagged behind the others when it comes to productizing AI capabilities.

Wood: When we talk about AI products, how much money is there to be made?

Purcell: So, the gold rush in the AI software category, right now, is worth about $50 billion, which is an enormous amount, considering the category didn’t really exist three years ago, right? But when you think about the amount of money that can be realized by enterprises adopting AI, more intelligent interactions with customers to generate additional revenue and then also all of the efficiencies that can be built using AI (which in many instances automates processes in the most efficient way possible). there, we’re talking about trillions of dollars.