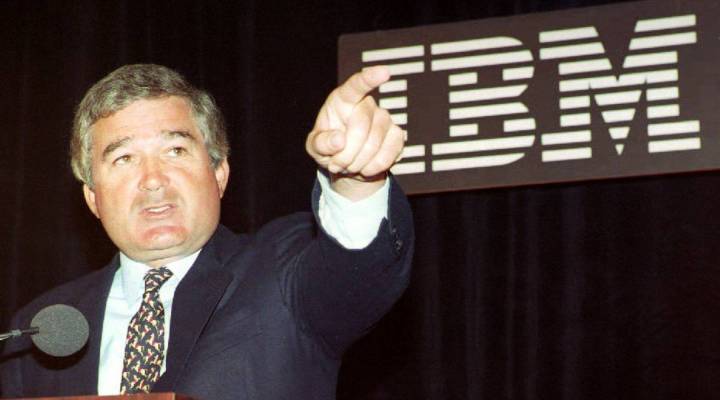 COPY
Louis V. Gerstner became CEO of IBM in 1993. Later that year, the company would lay off thousands of workers.  DON EMMERT/AFP/Getty Images
The Price of Profits

For those of us feeling insecure about our jobs and our futures, this story may sound like a fairy tale. Imagine for a moment an employer that takes care of you from cradle to grave, a company that hosts lavish carnivals for your family, a place where workers feel intensely loyal because they’re treated so well. That company was IBM.

“In the middle of the 20th century, it was the most famous, the most admired, the most widely respected company in the world,” said Quinn Mills, professor emeritus at Harvard Business School, and the author of “The IBM Lesson” and other books about its history and culture.

By the late 1960s, IBM had become the apex of how companies treated workers and thought of their roles in society.

Its culture was called “cradle to grave,” meaning if you got in, they’d take care of you. There were lavish carnivals for workers and their families. Around the country, there were country clubs and golf courses where workers at all levels could play for virtually nothing.

Casperkill Golf Club in Poughkeepsie, New York, is the site of a former IBM country club. IBM sold it more than a decade ago, and you can still find retired IBMers grumbling about the changes.

Ron Dedrick started working at IBM in 1966. Retired now, he spends his days at a golf course that was once a perk for IBM workers.

The ending of fringe benefits like the golf course are symbols of a larger transition at IBM — and most American corporations — in recent decades. At IBM, they meant a change to one of the company’s three core values outlined by its founder, Thomas Watson Sr., and his son, Thomas Watson Jr., who together ran the company for much of the first half of the 20th century.

The most famous of those values was what they called “respect for the individual,” and with it came one of the most astonishing policies in American business. For more than seven decades, IBM never laid off workers. If business changed, workers might be retrained and forced to adapt. There was the possibility of being moved across the country or overseas, giving IBM the internal moniker “I’ve Been Moved.”

But as long as you did your job, if you worked for IBM, you had job security. Thomas Watson believed it was good for business.

And it’s true. IBMers interviewed for this story who worked there starting in the 1960s, ’70s and ’80s are intensely loyal, even when they criticize some of the changes in recent years. Many said they would do anything for the company back then.

Most companies weren’t as generous as IBM. It was the most extreme example of a big business norm in the middle of the 20th century — a norm very different than today’s.

Thomas Watson Jr. absolutely believed that. As the son of IBM’s founder, and its postwar CEO, he gave a series of speeches in the 1960s outlining the IBM values he and his father developed.

“As businessmen,” he said, “we think in terms of profits, but people continue to rank first.”

Before we get to how and why that changed, let’s review the history of the corporation.

In the late 1800s, the coast-to-coast railroad network linked American states, creating the first mass market in the world. That allowed companies to build large, efficient, centralized factories, and with them came the first tycoons.

“The corporations that were most efficient, like Rockefeller in oil, and Carnegie in steel, grew to become very large corporations. Hundreds of millions of dollars,” Sylla said. “So then America had big business, and that continued into the 20th century.”

At their simplest level, corporations allow a group of people to put their money together to do things they couldn’t do alone. They can then grow by reinvesting their own profits, and issue stocks and bonds, growing much faster than if they had to raise and use their own cash.

Corporations brought us electricity, automobiles and radio, and then the public starts pouring cash into the stock market. And you probably know what happens next.

The stock market crashes, which leads to the Depression and the New Deal, and that brought modern financial regulations. For the first times, companies had to reveal a lot of information to investors, quarter by quarter and year by year.

“Wall Street hated it at the time,” Sylla said. “But not long after World War II, they realized it was probably the best thing that ever happened to them, because the public — because of the New Deal regulations — had a new confidence in Wall Street, and it boomed in the 1950s and 60s.”

‘The world to themselves’

After World War II, American companies “pretty much had the world to themselves,” Sylla said. Most of their rivals in Europe and Japan were rebuilding after the war’s destruction, so big companies were raking in cash and didn’t have any issue being generous.

“When we compare that time to today, we find everyone seemed to share in the prosperity, from the corporate executives right down to the assembly line workers,” Sylla said.

There was a lot of work to be done, so companies paid well, and with IBM in the lead, started to offer benefits like pensions and health insurance.

“The notion was there were three sources of power in society: government, business and labor,” Mills of Harvard said. “Those three elements of society would work together to manage the economy, society, etc.”

So by this period, those forces led more companies to look like IBM.

For IBM itself, Watson Jr. was making big bets, shifting the company from mechanical tabulating devices to this new thing called a computer. The System/360 was its first major mainframe.

Watson’s bets paid off. Hundreds of thousands of IBMers brought us into the modern computer age, leasing and servicing those room-sized mainframes to companies around the world.

But while IBM powered ahead, the rest of corporate America ran into problems in the 1970s.

Spending on the Vietnam War and the War on Poverty led to inflation. That made it more expensive for American companies to do business at the very moment Japan and Germany were ready to compete.

“Corporations were kind of squeezed,” Sylla said. “So American corporations began to rethink their whole models.”

And that rethinking led companies to focus almost entirely on their bottom lines.

As Sylla put it, companies began to “Forget about the workers. Build your factory in Mexico or someplace else where labor is cheaper,” became the thinking.

In the ’80s, management tried to protect the mainframe business against new competition from PCs. It didn’t work. By the early ’90s, IBM was running out of cash. There was talk of splitting IBM into pieces. Then IBM hired its first outsider to lead the company, Louis V.  Gerstner, who came from RJR Nabisco.

‘It’s no longer respect for the individual’

Sylla said this is the moment “IBM got a big dose of shareholder value,” the focus that’s transformed American business in the last 40 years.

One morning early on in Gerstner’s tenure, Thomas Watson Jr. joined the new CEO in the back of the car that drove him to the office. Gerstner said Watson told him to take whatever steps necessary to get the company back on track.

But in many ways, the steps Gerstner took were a repudiation of the values Watson outlined in the 60s. Gerstner declined interview requests. In a speech at the time, Gerstner saidIBM needed was “a series of very tough-minded, market-driven strategies.” Strategies, he said, that deliver performance in the marketplace and shareholder value.

In more recent years, critics contend IBM has moved into the financial engineering business, generating profits with financial strategies such as buying back its stock. IBM declined a request to interview the current CEO, Ginni Rometty.

IBM then, in 1993, did the unthinkable: a layoff. Sixty thousand workers had to go.

Even for workers who knew the company was in bad shape, it was a tough day.

“It was basically look to the left, look to the right, some of you won’t be here,” recounted Marcy Holle, who was an IBM communications manager at the time. “That’s when my heart went through the floor.”

Holle soon became very busy with how to tell workers — and the public — what was happening at one of the most iconic American brands. But around the office, that famous IBM dedication was fraying.

“Productivity decreased because people were looking for jobs, talking in the hallways about who they thought would get laid off,” she said.

Many credit Gerstner with saving IBM and keeping it together. To get there, Gerstner said, in effect, that IBM needed to look more like its peers. That meant cutting back on pensions and perks, like those golf courses where Ron Dedrick plays.

“So many things have changed,” Dedrick said. His wife still works at IBM. “Seemed to be out of control. In the past, you got rewarded for good work.”

In more recent years, critics contend IBM has moved into the financial engineering business, generating profits with financial strategies such as buying back its stock.

Workers like Robert Ochoa, who retired last month, said the company is not the same.