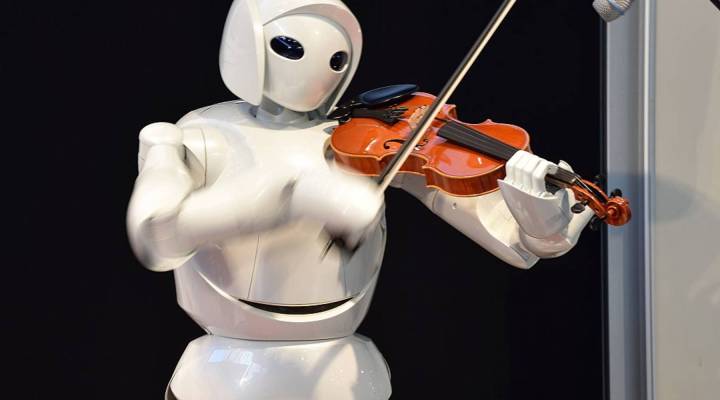 A violin-playing robot, one in a series of humanoid robots from Toyota Partner Robot, is displayed at a robot event for children in Tokyo in 2015. KAZUHIRO NOGI/AFP/Getty Images
Make Me Smart With Kai and Molly

A violin-playing robot, one in a series of humanoid robots from Toyota Partner Robot, is displayed at a robot event for children in Tokyo in 2015. KAZUHIRO NOGI/AFP/Getty Images

We got an email from Julian in Australia about that very issue. Here’s part:

I’d really like to hear from people whose work has gone through a bout of service management automation, and come out the other side. To me, it feels like my job requires more soft skills than technical. But I often wonder whether I’m actually liberating people to be more creative in their job, or just giving them something that’s marginally better than the last thing.

As it happens, this week we talked with singer-songwriter Marian Call, who worked with IBM’s Watson computer to sort through the crush of responses to her viral “first seven jobs” tweet. It was a good example of automation aiding the creative process, but it wasn’t Watson’s first creative endeavor.

In just the past couple years, researchers have flexed their artificial intelligence projects (and enjoyed some good PR) by trying to make them replicate human creativity. Is any of it good enough to pass for the real thing?

Um, we’ll leave that up to you.

It may wipe the floor with humans on “Jeopardy!” but IBM’s Watson is a pretty collaborative songwriter. The supercomputer helped producer Alex Da Kid write “It’s Not Easy,” which also features Wiz Khalifa, Elle King and X Ambassadors. It’s not clear who did what, and IBM would only say Watson made suggestions by analyzing years of writing and music. Maybe no one wants to take credit for the song, which is pretty bland.

Sony’s Flow Machines fares a little better. The software has written a few songs “in the style of” a given artist. For example, last fall researchers posted “Daddy’s Car,” which is supposed to be reminiscent of the Beatles.

This one is inspired by Duke Ellington and Irving Berlin, but sounds a little more prog-y.

As fleshed-out tracks, the Flow Machines stuff fares a little better than Watson’s collaborations. Pity the living, breathing U.K. band of the same name, which can’t put up quite the same numbers on SoundCloud.

Still, Sony’s computer-penned songs had producing and arranging help from French composer Benoît Carré. For an unvarnished look at AI songwriting, we’ll have to turn our focus to academia. Computer scientists at the University of Toronto have concocted a system called “neural karaoke,” which can analyze a photo, then draw from hours of music to write a little song about it. Late last year a researcher showed NPR what happens when you show the system a Christmas-y picture.

A song is a discrete work; even if it’s boring or weird, it sits on its own. If you have a human being there to take things over the finish line, even better. But when you’re trying to teach “written communication” to AI, things get more complicated, and there are some unintended results.

Take Google. In order to teach its neural network to speak more naturally, scientists fed the system thousands of romance novels. Then they had the computer to craft a series of sentences that shift in meaning from one given phrase to the other. As Quartz points out, the results read like bad poetry. Here’s one attempt:

Google has opened up some of its machine-learning software to the public, so with enough tinkering, you too can feed the machine high lit and see what it spits out.

Last year, cartoonist and software developer Andy Herd tried it with scripts for the beloved ’90s sitcom “Friends.” He posted a bunch of examples on Twitter. Here’s one scene:

[Scene: Chandler and Joey’s, Joey is waiting for the door. Ross is looking for Joey and Chandler’s stuck in the couch and screaming.]

Chandler: Well, I proposed to my shoe…

Joey: (laughs) This is his father… (Cave children.) Hey Pheebs?

Ross: What are you gonna do?

(All the dinner enters)

(Pause for a beautiful women walk into his apartment and she keeps glaring at Joey’s jacket.)

“I got a lot of laughs from it myself, so I just thought I’d share some of the good stuff,” Herd told the Daily Beast. “Maybe it’ll get people interested in new things. And I’m not very smart, so if I can do it, anyone can.”

Here’s another neural network that was fed a bunch of genre fare and ordered to make something new with it. This time, though, director Oscar Sharp and New York University AI researcher Ross Goodwin filmed the screenplay.

They loaded the AI, named Benjamin, with scripts for sci-fi movies and TV shows, then gave it the prompts from a 48-hour film contest they’d entered. The result is called “Sunspring,” and  Sharp told Ars Technica it’s more or less the “average” of all the scripts they fed into Benjamin.

Of course, this is human beings (including Thomas Middleditch of “Silicon Valley”!) interpreting a computer’s script, and their commitment and craft could almost fool you into thinking you’re watching something surreal and arty and romantic instead of talented people making the best out of some nonsense.

For what it’s worth, “Sunspring” finished in the top 10 in its contest, beating out hundreds of scripts written by human beings. It won the audience choice award too — but Benjamin voted for itself thousands of times.

Turns out Watson has pretty diverse interests. A few years ago at South by Southwest, IBM got the AI to craft recipes given a few inputs. The project’s head engineer told us that so-called “cognitive cooking” cares not for human bias or cultural divides, and instead suggests unexpected flavor combinations. The results were experimental mashups like Indonesian Rice Chili Con Carne or Bengali Butternut Barbecue Sauce.

Kai had some of the sauce, and he wasn’t wild about it. When it comes to cooking by AI, there’s no accounting for taste. 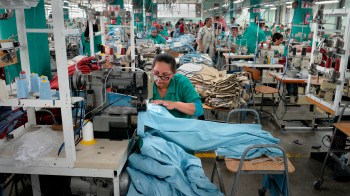 Automation and how it could worsen inequality