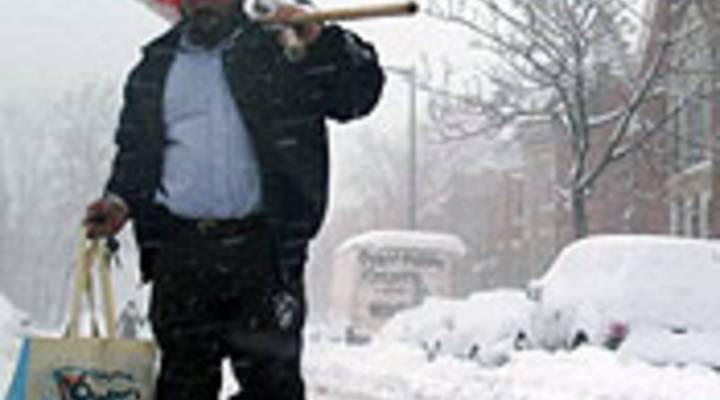 The economic impact of a megastorm

COPY
A man carries shovels as he makes his way to his store in a neighborhood in Washington, D.C. Eva Hambach/AFP/Getty Images

The economic impact of a megastorm

A man carries shovels as he makes his way to his store in a neighborhood in Washington, D.C. Eva Hambach/AFP/Getty Images
Listen Now

JEREMY HOBSON: Some are calling it Thundersnow. Some are calling it the Groundhog Day Storm. Maybe because it’s grounding just about everything. Flights are cancelled, businesses are closed, I-70 in Missouri has been shut down for the first time in history. It’s estimated one in three Americans will be affected by the heavy snow, freezing rain and bitter cold winds.

Marketplace’s Stacey Vanek Smith takes a look at the economic impact of the storm.

STACEY VANEK SMITH: The economic impact of this massive storm system is huge and diverse, says Louis Uccellini. He’s with the National Weather Service. He says there are people missing work, businesses being closed…

LOUIS UCCELLINI: Retail sales, lots of flights are being canceled. The impact of these storms definitely range up into the billions of dollars.

EVAN GOLD: In advance of the storm, grocery stores, home centers will see an increase in foot traffic. The other businesses that obviously do well are online retailers as well as any restaurant that does delivery.

Gold says this week sales of hats, gloves, and scarves are up 8 percent over last year; sales of rock salt are up nearly 50 percent. Still Gold expects the overall economic impact of the storm will be negative, and that’s just this storm.

GOLD: Remember, we still have a lot of winter to go.

In New York, where every inch of snow costs the city $1 million, I’m Stacey Vanek Smith for Marketplace.