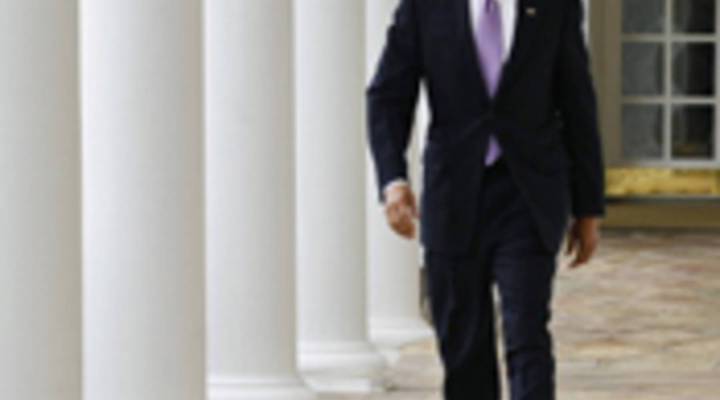 COPY
US President Barack Obama walks along the colonnade from the Oval Office at the White House in Washington, DC, before the State of the Union. JEWEL SAMAD/AFP/Getty Images

US President Barack Obama walks along the colonnade from the Oval Office at the White House in Washington, DC, before the State of the Union. JEWEL SAMAD/AFP/Getty Images
Listen Now

STACEY VANEK SMITH: The President gave his State of the Union Address last night. Among the major talking points: More money going to education, a pay freeze for federal employees and ways the U.S. can stay globally competitive. One of the ways he plans to do that is overhauling corporate taxes — lowering them actually. Here’s the president:

PRESIDENT BARACK OBAMA: Get rid of the loopholes. Level the playing field. And use the savings to lower the corporate tax rate for the first time in 25 years without adding to our deficit. It can be done.

Here to talk taxes with us is Dan Shaviro, professor of taxation at NYU law school. Good morning, Dan.

DAN SHAVIRO: Hi, how are you?

SMITH: Dan, so talk to me a little bit about corporate taxes. Are they particularly high in this country?

SHAVIRO: Corporate tax rates are high in this country. This doesn’t mean that companies pay more taxes than they do in other countries, but the rate is higher which means if they don’t pay a lot it’s because they’re doing tax planning, or they find legal ways of paying less — things that Congress decided to give special tax breaks to.

SMITH: Well, given that, will it make a difference if corporate tax rates are cut?

SMITH: So you don’t necessarily think that this would add to the deficit?

SMITH: What do you think of the plan as the president laid it out?

SHAVIRO: Well, it wasn’t very detailed. It’s kind of — whenever they want to do tax reform, lower the rates and broaden the base, it’s kind of like trying to give people sugar and bitter medicine at the same time: Everyone likes the sugar, but no one really likes the medicine much. It didn’t sound like he wants to take the lead on the thing — which things to take away — he seemed to be asking Congress and both parties.

SMITH: And finally, how do you expect companies to feel about this? Are they excited at this idea?

SHAVIRO: They’re going to vary. If you have a revenue neutral rate cut with base-broadening, some companies will win and they’ll like it, but other will lose and they won’t like it at all. And rule one in Washington is the losers scream more than the winners say thank you.