STACY VAKEK SMITH: Looking for a gift for the man who has everything? Consider the Dover sea Port. The historic port may soon be up for sale, as the UK struggles to pay off its budget deficit. It is one of the busiest ports in Europe and it’s attracting an unexpected bidder.

CHRISTOPHER WERTH: Recession or no recession, this stretch of the English Channel is prime real estate. It’s as close as you can get in Britain to the rest of Europe. But instead of looking over to the coast of France, Neil Wiggins turns and takes in Dover’s legendary white cliffs that tower over the port.

NEIL WIGGINS: This is a sight that’s greeted seafarers throughout the centuries.

Wiggins used to be one of those seafarers. He was born and raised in Dover, and would often pass the white cliffs during long journeys at sea.

WIGGINS: And I would get a little bit of a rush and excitement; kept an eye on it all the way down until it was out of sight again.

Now, he hopes to purchase this very port where he first set sail. Wiggins heads a local group called the People’s Port. It’s concerned that once the port goes up for sale, it will most likely end up with overseas investors. The worry is they’ll have little interest in investing in the town of Dover, which has seen tough times.

WIGGINS: It’s in the local interest and the national interest that it stays here with the people in Dover.

To do that, the People’s Port says it can raise about $600 million to buy it from the British government. It also plans to sell what it calls Dovorian Bonds. Each person in Dover could buy one for about $15 bucks, which would give them a vote in how the port is developed in the future.

That’s likely to go over well at this local arcade. Owner David Grilli fears foreign owners will cut jobs at the port

DAVID GRILLI: The general feeling in the town is that it should stay in British hands.

BOB GOLDFIELD: These things are very emotional, and people very much feel that it’s their port. But the “Little England” way of looking at things just doesn’t work nowadays.

He says bringing in private investors will allow the port to borrow money, something it can’t do now. And the port can then use that money to grow which Goldfield says will help the town grow as well. 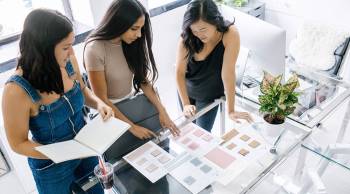 This handbag company is grappling with a new tariff reality