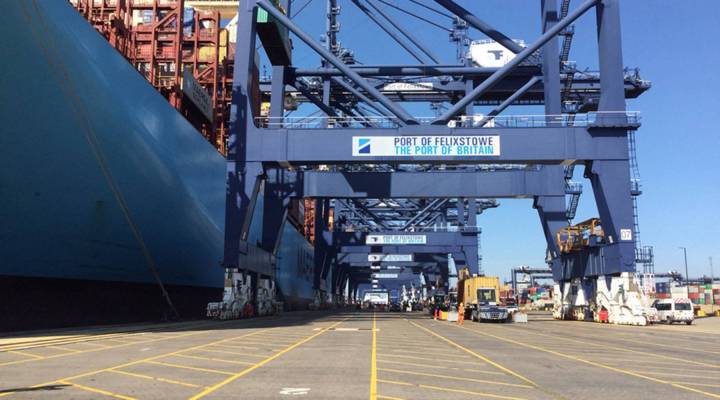 Brexiters call it “Project Fear,” a campaign, they say, that is aimed at terrifying the Brits into reconsidering their decision to leave the European Union. Among the terrors summoned up to dismay the fainthearted, the Brexiters say, is the prospect of massive delays at Britain’s ports causing 30-mile traffic jams, much higher import prices, big job losses and even shortages of food and medicines as soon as the country leaves the trading bloc of which it has been a member for more than 40 years.

Opponents of Brexit — known as “Remainers” — insist that these dire predictions are not fearmongering but an accurate portrayal of what could happen if Britain fails to forge the closest possible trading relationship with the rest of the EU. Checkpoints and customs declarations, they say, will have to be re-introduced and that is bound to disrupt the free flow of goods between Britain and its largest trading partner.

“Baloney!” is the Brexiters’ response. And they point to the port of Felixstowe on the southeast coast of England as an example of friction-less trade.

Felixstowe is Britain’s biggest — and busiest – container port. Around the clock, giant gantry cranes are at work on the dockside, lifting the steel boxes off the ships and dropping them on to the waiting trailers. $100 billion worth of goods flow in and out of this port every year, most of these items to and from countries outside the EU and therefore customs declarations are required. And yet, there’s not a single customs official in sight.

“92 percent of all containers being landed, are customs – cleared before they hit dry land. They’re customs-cleared on the vessel when they come in,” Steve Lamb of Maritime Cargo Processing in Felixstowe told Marketplace.

Steve Lamb, General Manager of Maritime Cargo Processing, a company which handles the data for  the $100 billion worth of cargo that passes through the port of Felixstowe every year.

Lamb works well away from the port, in a converted chapel where the hush is almost church-like as he and a handful of staff sit at computer terminals, transferring data between the port, customs, police, freight and transportation companies.

“It is entirely digital. Works seamlessly. And as you can hear it works perfectly. There are no phones going. No noise. Everything works like a Swiss watch,” Lamb said.

Customs can assess the cargoes and levy their duties electronically before docking. Police and other authorities can take a look too and, as a result, only a tiny fraction of the containers are stopped and opened for inspection at the port. There is, said Jason Flower of the Felixstowe Port Users Association, rarely any delay.

“The cargo is automatically cleared and as soon as a container lands, it can be on its way,” Flower said, adding that, in principle, British ports should not clog up after Brexit, if they have the time to plan and if they are equipped with a computer system like Felixstowe’s.

But he warned that there could be difficulties if Britain crashes out of the EU at the end of March next year without any deal and without a transition period to prepare for the country’s departure from the bloc.

Nevertheless, Brexiters claim that Felixstowe is a beacon of hope, proving that Britain can trade smoothly and seamlessly with Europe after Brexit. David Campbell Bannerman, a Member of the European Parliament for the electoral district in which the port is located, and a staunch Brexiter, says Felixstowe’s cargo management system shows that the predictions of 30-million traffic jams causing food and medical shortages after Brexit are akin to the Y2K computer scare at the turn of the century.

“It’s a bit like the Millennium Bug, all of this. They said planes would fall out of the sky at the stroke of midnight. But they didn’t,” he said. “The Brexit disasters and delays they’re predicting are not going to happen. For heaven’s sake, most of the trade coming from outside the EU into Britain is currently handled very efficiently and very effectively, as Felixstowe demonstrates.”

But, Remainers point to a different port, Dover, sixty miles to the south, to illustrate their concerns about Brexit. Much of the food and other commodities and goods arriving from continental Europe into Britain come into Dover by ferries, on trucks. While Britain remains in the EU, this traffic flows freely without customs declarations but that will change if the UK leaves the bloc without striking the right type of trade deal. Jonathan Lis, a pro-Remain commentator, says the Felixstowe model wouldn’t work in Dover. The ferry crossing from France to this port is too short for full electronic customs clearance while sailing, and hemmed in, as it is, by its famous white cliffs, the port doesn’t have the space for even a small percentage of the trucks to park for inspection.

“So, you’ll get gridlock. Supermarkets won’t get their food. Companies won’t get the goods they need for their just-in-time manufacturing. You can’t possibly compare Dover with Felixstowe. It’s apples and oranges,” Lis said.

Back in Felixstowe, Steve Lamb is unashamedly upbeat about Brexit. His company is now working on a cargo management system designed specifically for Dover.

“I believe every challenge is an opportunity. I believe Britons will rise to the challenge,” he said. “I’ve got many friends in the freight forwarding business and some of them voted remain but they’ve embraced the challenge ahead and they’re confident they can thrive through to the other side of this.”