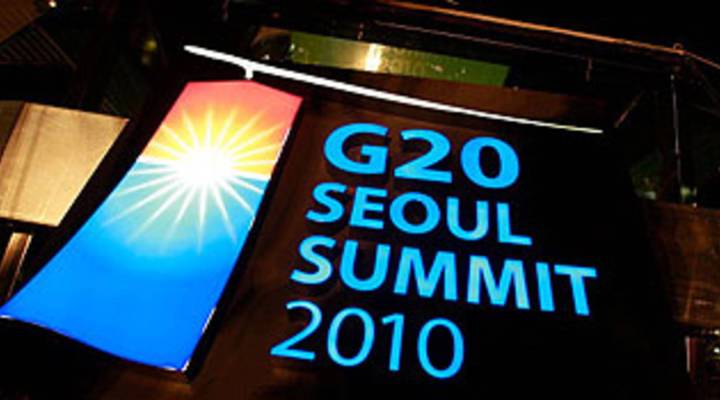 Obama seeks cooperation ahead of G20

Obama seeks cooperation ahead of G20

KAI RYSSDAL: It’s already Thursday morning over in South Korea, so I suppose you could say the G20 summit actually starts today. But whatever the semantics, President Obama’s going walk in the door a bit on the defensive.

In a letter to other leaders last night, the President said, in essence, ‘Hey, we all need to get along if we want to get the global economy growing again.’ The letter followed sharp criticism of the U.S. the past couple of days from pretty much everybody out there.

STACEY VANEK-SMITH: The reason Germany, China and many emerging economies have an axe to grind with the U.S. right now, boils down to one thing.

Andrew Rose is a professor of International Business at Berkeley.

ANDREW ROSE: The reason why the Europeans, especially, but also the Asians are upset is that the Fed has decided to engage in quantitative easing.

Quantitative easing is the unusual monetary policy the Federal Reserve announced last week. It’s aimed at lowering interest rates to encourage borrowing and lending. It does that by printing a lot of money — $600 billion worth.

Rose says that pushes the value of the dollar down, and that makes our trading partners feel threatened.

For developing countries, like Brazil and Thailand, they worry that lower U.S. interest rates will send investors flooding into their markets looking for higher returns. That could spark inflation.

Another concern is that the U.S.’s move could prompt other countries to throw up trade barriers, says Bill Frenzel with the Brookings Institutions.

To calm those fears, the Obama administration is trying to convince the world that it’s just doing what it has to — to restore health to the U.S. economy.

And it wants other countries’ support in letting currencies readjust, says the Charles Freeman with the Center for Strategic and International Studies.

CHARLES FREEMAN: If everybody says, ‘We’re taking our marbles and going home,’ we’ve got kind of a mess. I think what the administration and the Fed is doing is saying, ‘We believe what’s really best for the world is if the U.S. economy generally recovers.

The recession has weakened the U.S., but it’s still the world’s largest economy.

RYSSDAL: Interestingly enough, even though we’ve been talking about quantitative easing like it’s already happening, it’s not. The Federal Reserve Bank of New York announced today that they’re going to start buying up Treasury bonds Friday.