An ad campaign in Chicago’s Hancock tower has prompted a deep semantic exploration of the facility’s eateries. A slogan for the cafe in the observatory invites guests to the “Drink it all in at Chicago’s highest cafe and bar,” ignoring the fact that there’s a restaurant called the Signature Room located two floors above the observatory.

Observatory general manager Daniel Thomas noted the slogan wasn’t a mistake. “We’re a cafe and bar,” he said. “They’re a restaurant and lounge.”

At least you know what you’re getting when you visit the Space Needle. 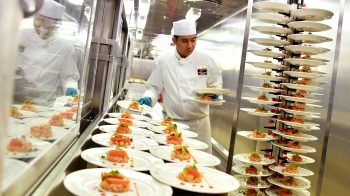 Do you work part time in a restaurant?