Why we might not have built the Hoover Dam today

Why we might not have built the Hoover Dam today

The Hoover Dam’s completion 75 years ago marked one of the biggest public works projects in the U.S. and a win for jobs and electricity. But experts say the Dam would not pass today’s environmental guidelines.

The Hoover Dam harnessed the power of the Colorado River to generate reliable electricity for southern California, Las Vegas, and many of the factories that helped win World War II. It also created much-needed jobs during the Great Depression. But Joseph Stevens, author of “Hoover Dam: An American Adventure,” says he doesn’t think a project like the Hoover Dam would get off the ground if it were attempted today. “Worker safety rules and environmental impact assessments would make the Hoover Dam too expensive.”

There were also significant downsides to the project: Over 100 construction workers were killed, and the Dam had a large impact on the Colorado River, flooding wildlife habitats and changing its natural flow of the Colorado. Stevens notes this would not pass today’s environmental impact assessments.

But University of California energy professor Daniel Kammen says the Hoover Dam was a visionary public/private partnership. “That was essentially a government-designed vision, and it found partners in the private sector, and partners in the developers of many big cities in the southwest. So that tied together an energy plan and a development plan.”

The Hoover Dam was finished in five years — two years ahead of schedule — and cost a $49 million, which is worth under $750 million today. 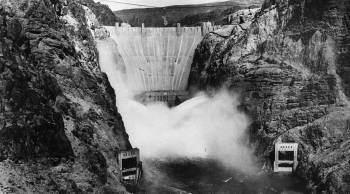 One of the most powerful unknowns: The Bechtel Corporation