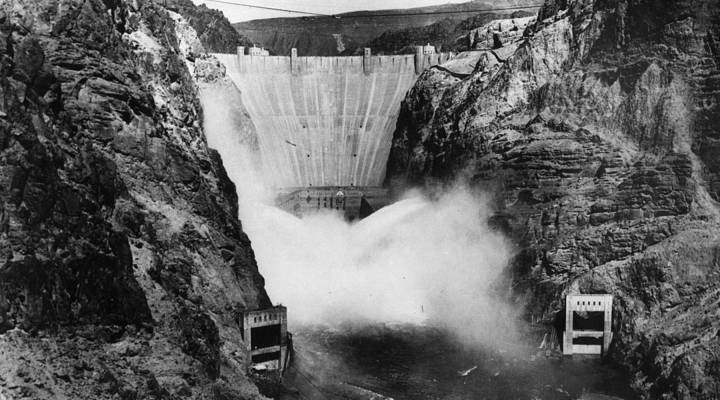 COPY
Hoover Dam in 1936, the year it was completed. The dam was finished two years ahead of schedule and under budget, a feat unlikely to occur today. Getty Images

Hoover Dam in 1936, the year it was completed. The dam was finished two years ahead of schedule and under budget, a feat unlikely to occur today. Getty Images
Listen Now

President Trump’s advisers are still at the draft stages of a national infrastructure plan. Trump is hoping to inspire a trillion dollars of infrastructure spending, much of it privately funded. But 80 years ago, during the Great Depression, the federal government fueled a public works revolution. Virtually every county in America got a project under Franklin Delano Roosevelt’s New Deal. Some got icons, like Hoover, Shasta, Grand Coulee and other massive dams. Those kind of monuments just don’t happen today.

Shasta Dam is a linchpin in California’s water system. It took seven years to build, starting in 1938, and was funded under the New Deal’s Public Works Administration.

Especially dams. David Freyberg, associate professor of civil engineering at Stanford University, said dams have gone out of fashion. Many of the good dam sites have been taken, for one. But there are also modern alternatives to consider.

“Certainly if you look at the cost of a new water supply, doing that via a large dam is very expensive, per gallon of water, relative to other ways of obtaining additional water supply,” Freyberg said. Today, environmentalists argue instead for alternatives like groundwater banks, recycled wastewater, and more water efficiency and conservation, among other methods.

Freyberg said when dams like Hoover and Shasta were built, the environmental effects weren’t yet fully understood. Take Shasta Dam in Northern California, built shortly after Hoover. It tamed the Sacramento River, which frequently threatened to flood nearby communities. But Richard Walker, an emeritus professor of geography at University of California, Berkeley, said the dam harmed wildlife and upset ecosystems.

“Shasta basically destroyed the salmon run of the Upper Sacramento, which was one of the great salmon runs in the world,” Walker said.

But monuments like Hoover, Shasta and Grand Coulee, on the Columbia River in Washington, were also built during a time of relatively lax worker safety and labor standards. Think of the Hoover Dam workers who suffered from carbon monoxide poisoning and heat stroke. Workers even lost their lives building the mega-dams of the Great Depression. More than 100 men died at Hoover under work and living conditions that would never be tolerated today. Historians say it’s partly why the dam was completed two years ahead of schedule and under budget. That’s not to say proposals for smaller dam projects don’t have support today, particularly from agricultural interests. In California, farmers are pushing for several controversial new dams, including one on the San Joaquin River.

Acquiring land for mega-projects is harder today as well. At Hoover, on the Colorado River between Arizona and Nevada, the government managed to buy out an entire town. The community of St. Thomas, founded by Mormons, was submerged beneath Lake Mead, the reservoir at Hoover Dam, in 1938. The government bought up land to build Shasta Dam as well. The Winnemem Wintu, a tiny native American tribe that lived in the area, contend the government simply took their land.

Today, even a proposal to raise Shasta Dam to increase water storage capacity draws loud opposition. Groups like the Sierra Club contend it violates a state environmental law that protects the nearby McCloud River. The Winnemem Wintu say expanding the reservoir would flood more tribal sites that it considers untouchable.

Caleen Sisk is chief of the Winnemem Wintu, a tribe that lost its land when Shasta Dam was built in the late 1930s and early ’40s. The painting is of Sisk in traditional garb.

“Shasta Dam is pretty much the weapon of mass destruction for our people,” Chief Caleen Sisk said. “Even though we can’t live there, we have always gone back there. We always go there to dance. We always keep up our prayers to the sacred places.”

Big builds like dams and other mega-projects are highly scrutinized today, subject to more regulations, hearings and other oversight. The “red tape,” some good, some bad, depending on your interests, makes things pricier. Sometimes too pricey. The federal government has already indicated it can’t afford to foot the entire bill for raising Shasta Dam, for example. It would cost well over a billion dollars, more than double what the U.S. government spent, in today’s money, to build the dam in the first place.