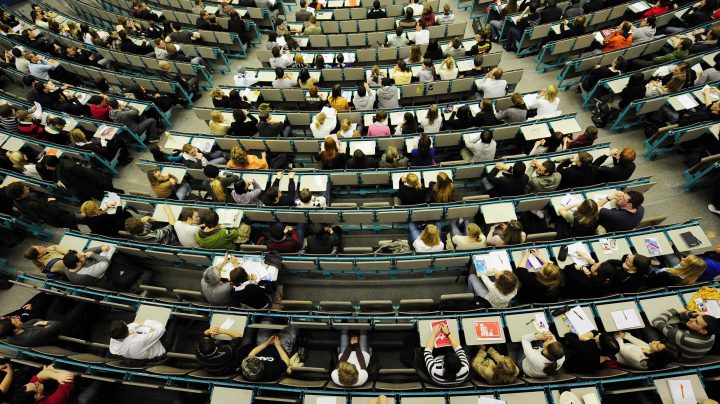 COPY
"What we expect in economics is that everyone will be ... rational," says economist Gary Hoover. Above, students at a university in Germany. Torsten Silz/Getty Images
Race and Economy

"What we expect in economics is that everyone will be ... rational," says economist Gary Hoover. Above, students at a university in Germany. Torsten Silz/Getty Images
Listen Now

Just 3% of Ph.D.s in economics were awarded to Black people in 2016, according to a report from the American Economic Association. One way some economists are proposing to fix economics’ diversity problem is by changing the way introductory economics is taught to include more on race. Marketplace host Kai Ryssdal spoke to Gary Hoover, chair of the economics department at the University of Oklahoma, about how he approaches the topic of race in his intro courses. The following is an edited transcript of their conversation.

Kai Ryssdal: So when you stand up there in Econ 101, first day of the semester — whether this fall it’s virtual or in person, who knows — what is your thought process on getting race into this conversation?

Gary Hoover: Well first, I think I need to build up the fundamentals. First, we have to do the more mundane things and talk about, hey, where the supply equals demand. What does “marginal” mean? And once we learn all of these tools, it’s then time to think about OK, let’s actually apply them to circumstances that you see every day.

Ryssdal: What does it look like? What’s the light bulb moment when later in the semester you say, OK, apply these theories. You’ve learned the facts of reality in this economy. What does that look like? What do they say to you?

Hoover: Well, one of the things we do is we talk about income inequality. And so as I’m talking about income inequality, I’m talking about the things that are going to separate people on the income distribution. And so we’re going to talk a little bit about education. And I’m going to say, hey, all right, let’s take a look at that. And after we’ve identified all of the other easily found factors, I say, well, well, there’s still a difference here, what’s going on? And then some people will say, well, you know what, you haven’t mentioned this gender, my, ah, good point. And then I let them come to the conclusion themselves. And they’re like, well, you know, another thing missing is race. I’m like, ah, now we’ve got something to talk about. And we enter the discussion that they bring it up themselves, so that means they’re ready to talk about it.

Ryssdal: I don’t know if you know who Bill Spriggs is. He’s a professor of economics at Howard. He’s the chief economist at the AFL-CIO. We had him on the program —

Ryssdal: All right. So anyway, so I asked him when he went in his career, he realized that economics, the study of economics, and how it’s taught in schools, is fundamentally racist because he had written a whole, long white paper that we asked him about. And he said, very first day of my first economics class. Does that ring true for you?

Hoover: Absolutely. What we expect in economics is that everyone will be the rational man. And so therefore, racism would work against people’s best interest, therefore, it doesn’t exist. Discrimination works against people’s own pockets. Therefore, these anomalies that you claim to see there aren’t there.

Ryssdal: And that just seems insane.

Hoover: It is, but it’s just much easier not to talk about it and deal with the issue as it really exists.

Ryssdal: Can we talk about the students for a minute? You’re in Oklahoma now. You have done time at the University of Alabama earlier in your career. What do you make of how ready students are to hear what you are trying to teach them?

Hoover: You know, it’s been interesting to me, and that in both places, I found that students will bring the topic up. They’ve already heard things at the dinner table sitting around with Mom and Dad. I’m here in college. Now, what does economics have to bring to the table? And for the most part, we’ve said nothing. And that’s been one of the greater disappointments. I also think that some of my white colleagues have been hesitant to say anything about it for fear of offending, right? And so the easiest way to do it is to say, well, let’s leave it to Gary Hoover to talk about it. He is, you know, a Black economist, and so maybe it will sound better coming from him. Like, well, you know, but the facts still exist, whether you’re saying it or I’m saying it.

Ryssdal: Do you think having these conversations will help more students, more Black students specifically, stay in your field?

Hoover: It has to be one of the things that attracted me to this field. So growing up, my mother was the hardest-working person I had ever seen. And she said, hey, you know what, if you just work hard, you’re going to get ahead in life. And that never happened for us. We always were struggling. And so I wondered about that. And I wondered, can economics help me understand why it is that just working hard wasn’t enough? Economics brought me to where I am. And I think that it can do even more and people have those questions come in, especially people of color. They want to be able to use economics.