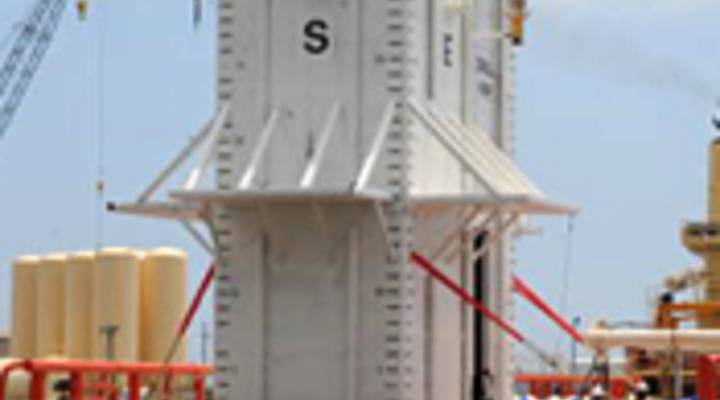 COPY
The Pollution Control Dome leaves Port Fourchon, LA. onboard an oil work boat as it makes it way to cap the source of the oil slick from the BP Deepwater Horizon platform disaster in Louisiana. Mark Ralston/AFP/Getty Images
BP Spill: Ripples

The Pollution Control Dome leaves Port Fourchon, LA. onboard an oil work boat as it makes it way to cap the source of the oil slick from the BP Deepwater Horizon platform disaster in Louisiana. Mark Ralston/AFP/Getty Images
Listen Now

Stacey Vanek-Smith: A ship carrying a 100-ton concrete and steel dome is making its way through the Gulf of Mexico this morning. Later today BP plans to drop the 40-foot dome over the leak site. It’s currently spewing more than 200,000 gallons of oil into the Gulf every day. Meanwhile, a major oil industry gathering is going on in Houston today focusing on offshore drilling. Our own Rob Schmitz is there, he joins us live. Good morning, Rob.

Vanek-Smith: Rob, what are these people saying about how this spill will impact their industry?

Schmitz: Well, many here are pretty worried that this is going to lead to a more regulated industry. They think their industry is over-regulated as it is, and with more regulation, they say the cost of business will increase, leading to higher prices at the gas pump for consumers.

Vanek-Smith: What kind of regulation are they worried about?

Schmitz: Well most here agree it’s going to lead to requirements for more safety measures on these offshore rigs. I had a chance to speak to a man named David Doig, he’s the CEO of Opito, a company that sets global safety standards for the oil industry. And he told me that, he said he wondered why many countries to require what’s called an acoustic switch. Now this is a safety device that some say may have prevented this bill. The U.S. doesn’t require companies to install it, and consequently it wasn’t installed on the Deepwater Horizon rig. You know, Doy told me that only Norway and Brazil require oil companies to install these devices:

David Doig: The question needs to be asked is why only two countries when we have a global industry where all the players are working across all the boundaries? You don’t work in the local environment, you work globally as a global oil company.

Schmitz: Yeah, it’s a conference that happens every year, and it’s huge — there’s 70,000 people here, as you mentioned, and you know with all those people you’d think some would want to talk to journalists. But many people here are really guarded when asked them about this spill. You know, those, all those asked here are most likely worried about potential liability, but even companies who didn’t have a stake in this spill were pretty tight-lipped.