Bill Radke: Here’s an industry doing well — for-profit colleges, like DeVry. Enrollment is up at those schools, despite some negative attention from regulators and the media. The colleges are answering their critics today with a new study of their own, as Amy Scott reports from the Marketplace Education Desk.

Amy Scott: For-profit schools have been criticized for their aggressive recruiting and high costs.

Mark Pelesh is with Corinthian Colleges, one of the largest for-profits. To fight back, he says Corinthian commissioned a study.

Mark Pelesh: We thought it was important to get some real data that was rigorously put together to help frame a better, more accurate view of the sector.

Pelesh says data from the Department of Education show that for-profit schools graduate a higher percentage of students than community colleges.

Gail Mellow is president of LaGuardia Community College in Queens. She says problems with data make it hard to compare schools.

Gail Mellow: But I think the thing you can compare is what it costs students and the kind of debt loads students leave the colleges with.

Mellow says a two-year degree in Electronics and Computer Technology costs more than $42,000 at the for-profit DeVry College of New York. At her school, it would be just over $6,000. 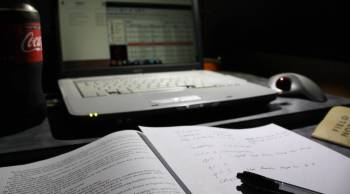